Schools to Reopen in Uttar Pradesh, Punjab, Sikkim From Tomorrow; Here Are The Key Guidelines 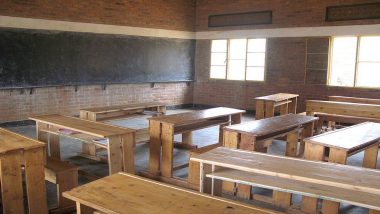 New Delhi, October 18: After seven months of closure caused by COVID-19, schools in Uttar Pradesh, Punjab and Sikkim will reopen from tomorrow. The institutes would operate again in accordance to the guidelines issued by the Ministry of Home Affairs (MHA). The respective state governments have also imposed regulations, which include shifts, alternative day classes and no mandatory attendance, among others. Schools and Colleges in India Will Not Reopen From Mid-October? PIB Fact Check Debunks Fake News, Reveals Truth Behind Viral Post.

In Uttar Pradesh, the government has asked public and private schools to call only 50 percent students on a given day, and the remainder 50 percent should be asked to attend on the next day. Social distancing norms needs to be strictly followed and the classes must be sanitised at regular intervals.

The UP government has also barred the schools from making attendance mandatory. Further, if any student, teacher or any other staff member shows symptoms of fever or cold, they should be asked to go home and visit the nearest medical centre if symptoms persist.

Similar restrictions were announced in Punjab, where schools will operate for only three hours a day. The government has barred the institutes based in containment zones from resuming operations. Among other guidelines, only one student would permitted to sit on one bench, and all entry-exit gates of schools will remain open to prevent overcrowding.

In Sikkim, where schools had partially reopened from September 21, all institutes will be opened up from tomorrow. The government has partially rejjiged the academic calendar, terminating winter holidays and all Saturday offs to make up for the time lost.

(The above story first appeared on LatestLY on Oct 18, 2020 09:24 PM IST. For more news and updates on politics, world, sports, entertainment and lifestyle, log on to our website latestly.com).