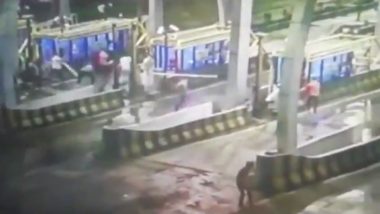 Bhopal, September 19: A toll plaza on the Indore-Ahmedabad highway was vandalised by unidentified miscreants last night. The incident, according to preliminary reports, took place in the late hours of Friday. The CCTV video shows the vandals using sticks and rods to damage the toll plaza. Motorists Overspeeding on Toll Plaza Stretch on Mumbai-Pune Expressway to be Fined Rs 1,000.

The vandalism was reported in Betma area of Indore, where toll is levied on vehicles moving towards Ahmedabad and arriving into Indore from the region. Farmers in the area were reportedly anguished over the toll collected on their vehicles supplying vegetables and grains, despite the hardship of COVID-19.

#WATCH Unidentified miscreants vandalised a toll plaza on Indore-Ahmedabad Highway, in Betma area of Indore, Madhya Pradesh yesterday night. A policeman said, "It seems it was done by farmers who were angry over the collection of toll tax." pic.twitter.com/ewAeRmD8EE

(The above story first appeared on LatestLY on Sep 19, 2020 11:31 PM IST. For more news and updates on politics, world, sports, entertainment and lifestyle, log on to our website latestly.com).