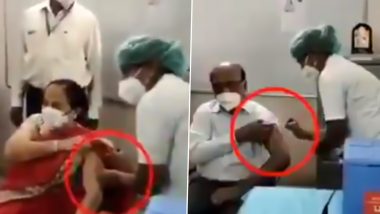 Tumkur, January 21: Tumkur DMO Nagendrappa and government nursing college principal Rajani stirred controversy after they pretended to get vaccinated with Covaxin just for media coverage. The vaccination drive started in Karnataka's Tumkur district hospital on January 16. Nagendrapada and Rajani were among the first to get vaccinated with Bharat Biotech's Covaxin. Netizens are demanding the dismissal of the DMO and the principal of the government nursing college after a video went viral. PM Narendra Modi and Chief Ministers to be Vaccinated in Next Round of COVID-19 Vaccination: Reports.

In the video, it could be seen that both pretended to receive the vaccination, with the needle just touching them. They posed for the camera for media coverage. Their act drew flak from people. Notably, people are also demanding that the government should give proof about the efficacy of the vaccine as images and videos of top officials being vaccinated cannot be evidence. As per The News Minute report, , they took the vaccines and later posed as the photographer needed photos of them taking the shot. COVID-19 Vaccine Reaction: Mild Infection Good Sign, Shows Immune System Responding to Vaccine and Creating Antibodies, Says AIIMS Director Dr Randeep Guleria.

Video of Nagendrapada and Rajini "pretended" to take COVID-19 Vaccine:

"A great example of how fools rule people"

A acting scene where a corona vaccine is injected in Tumkur district of Karnataka.a great example of how fools rule people. pic.twitter.com/AGGjWnQ8O7

"How will you instil confidence in general public about the vaccine?"

Dear @BSYBJP @CMofKarnataka @drashwathcn Recd this video on WA of what appears to be a video of faking the corona vaccination by Tumkur DMO and their team. How will you instil confidence in general public about the vaccine? @narendramodi @drharshvardhan @RMCpost pic.twitter.com/xIrAZacsvd

The Drugs Controller General of India (DCGI) gave approval for emergency use to Serum Institute of India's Covishield and Bharat Biotech's Covaxin in January this year. India on January 16 began the world's largest vaccination drive against COVID-19. In the first phase, three crore health and frontline workers will be vaccinated. Priority will also be given to 27 crore people above 50 years and people below 50 years with comorbidities.

However, questions are being raised on the efficacy of Covaxin whose phase three clinical trials are still underway. Notably, two people died after receiving the jab. The government clarified that the deaths were not related to the vaccination.

(The above story first appeared on LatestLY on Jan 21, 2021 01:19 PM IST. For more news and updates on politics, world, sports, entertainment and lifestyle, log on to our website latestly.com).