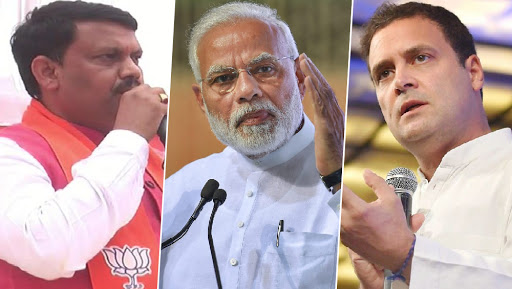 Ahmedabad, April 20: With the third phase of Lok Sabha Elections scheduled in a couple of days, politics and political comments have superceded to a new low when Gujarat Minister Ganpat Vasava compared Prime Minister Narendra Modi with a 'lion' and Congress president Rahul Gandhi with a 'puppy of a dog' wagging its tail.

Addressing a political rally in Gujarat on Saturday, the state minister said, "When PM Modi stands, it looks like the lion of Gujarat is standing. When Rahul Gandhi stands, it looks like puppy of a dog is there wagging its tail, if Pakistan offers it a 'roti', it'll go there & if China offers it 'roti', it'll go there as well." Azam Khan on 'Khaki Underwear' Comment Against Jaya Prada: I Will Not Contest Polls if Proven Guilty.

This is not the first time Rahul Gandhi or PM Narendra Modi had been compared by local politicians to gain political mileage. Earlier too, even Congress's general secretary Priyanka Gandhi too was attacked by several leaders. Former Union Minister Uma Bharti had called her the 'country will remember her as thief's wife'.

Similarly, politics steeped a new low when Samajwadi Party stalwart Azam Khan allegedly made a 'disgraceful' comment on BJP leader Jaya Prada by stating that she wears 'khaki underwear'. Addressing a political rally in Uttar Pradesh, Khan had allegedly said, "You got represented (by her) for 10 years. People of Rampur, people of Uttar Pradesh and people of India, it took you 17 years to understand her reality. But, I could recognize it in 17 days that she wears khaki underwear."

Soon after the comment, the National Commission for Women termed his remarks 'extremely disgraceful' and said the panel will be sending a show cause notice to him. He was barred from addressing political rally by EC for the second phase and was given strict warning.

Considering the point that Ec has taken strict action even against the ruling chief minister and big leaders for violating the model code of conduct, it looks like the Gujarat Minister too made a very big mistake.