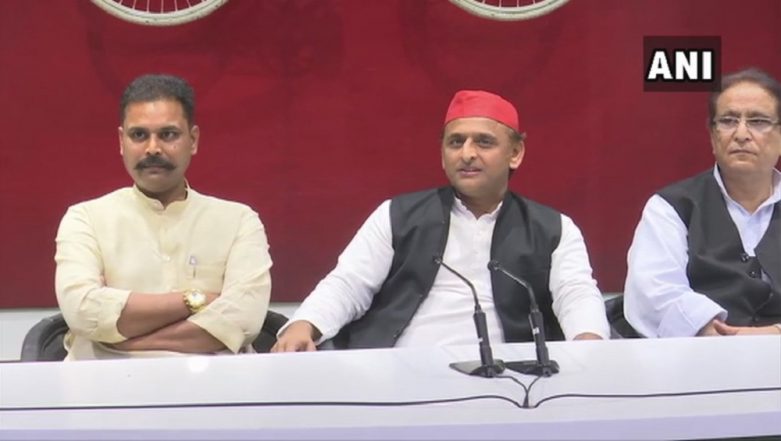 Lucknow, March 27: BJP MP Anshul Verma joined the Samajwadi Party on Wednesday after he was denied ticket by the Bharatiya Janata Party for the Lok Sabha polls. "I have joined the SP without any conditions. My fault for denial of ticket might be that I had raised voice against distribution of liquor in a temple premises at a conference of the Pasi community, to which I belong," Verma said.

"I was hurt by this and had also written to Chief Minister Yogi Adityanath," Verma told reporters at the SP headquarters in presence of party supremo Akhilesh Yadav. Verma said his other fault might be that he did not prefix the word 'chowkidar' to his name in Twitter profile. He was denied ticket by the BJP for the Lok Sabha elections and the party has fielded Jai Prakash Rawat from the Hardoi seat, held by Verma. Lok Sabha Elections 2019: BJP MP Savitri Bai Phule Joins Congress in Presence of Rahul Gandhi and Priyanka Gandhi Vadra.

Addressing media persons later, Yadav attacked both the Congress and the BJP saying that there was no difference between the two parties. "In the past 30 to 40 years, see how other countries have developed. The Congress is also responsible in taking country backward and for poverty and unemployment," he said.

He also alleged that "injustice" was being meted out to SP leader Azam Khan.

Yadav mentioned the demolition by the local administration of the boundary walls of Rampur's Ali Jauhar University, with which the senior party leader is associated. Khan, who was also present at the press conference, attacked Prime Minister Narendra Modi by accusing him of using objectionable language in his speeches.