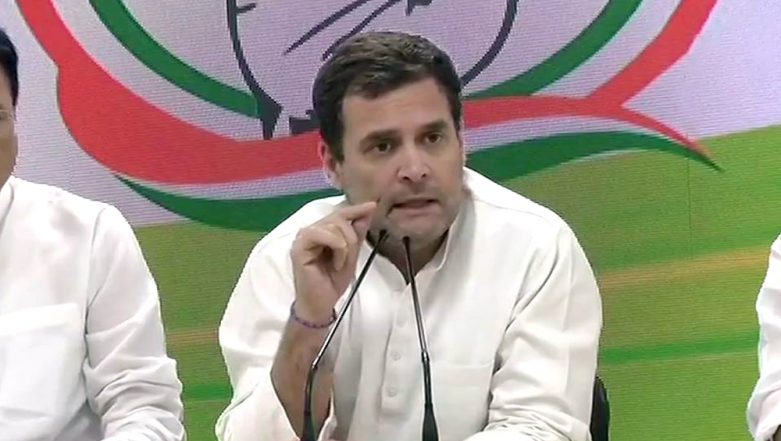 New Delhi, March 26: Congress President Rahul Gandhi's latest announcement to provide to Rs 72,000 per annum to 5 crore households, if implemented, is likely to have a major impact on the country's exchequer, costing a huge Rs 3.6 lakh crore per annum, according to economists.

Under the 'Nyay' scheme, Gandhi said the Congress will provide Rs 72,000 per annum to 20 per cent poorest families in the country. The scheme will benefit 5 crore families and 25 crore individuals directly, he said. Rahul Gandhi Explains Congress' Minimum Income Guarantee Scheme, Promises 'Rs 72,000 Per Year to 20% Most Poor Families'.

Economists are of the opinion that the party should come out with the details of the scheme, observed that such a scheme would have a significant pressure on the economy.

N.R. Bhanumurthy, professor at National Institute of Public Finance and Policy, said that it could be a scheme wherein some of the non-functioning welfare schemes are subsumed. Such a plan may work, he added.

Criticising the announcement, economist Surjit Bhalla tweeted: "Is RG's #MinimumIncomeGuarantee a game changer or absurd beyond compare? The idea is fundamentally flawed and so beyond compare."

In defence of the announced scheme, former Finance Minister and Congress leader P. Chidambaram said in a tweet: "We have consulted economists, this is doable, and we will adhere to fiscal discipline."