Lok Sabha Elections Results 2019 Predictions by Satta Bazar: Who Will Be The Next Prime Minister? Narendra Modi Vs Rahul Gandhi Race at Matka

Satta Bazar or Satta market is abuzz with predictions that the Bharatiya Janata Party (BJP) is most likely to retain power. 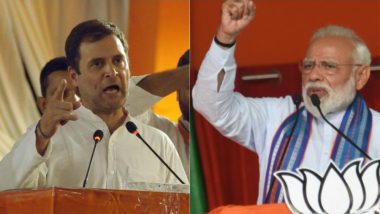 New Delhi, May 9: The results of Lok Sabha elections 2019 will be declared on May 23. Satta Bazar or Satta market is abuzz with predictions that the Bharatiya Janata Party (BJP) is most likely to retain power and Narendra Modi will enjoy the second term as prime minister. High bids are being placed in Mumbai's Satta market on Narendra Modi becoming the prime minister again. Similarly, bookies believe the BJP has strong chances to emerge as the largest single party on May 23.

According to bookies playing Matka, the BJP is predicted to win 226 to 250 seats. For betting on these numbers, the rate is 60 paise. The betting rate on BJP winning more than 300 seats and less than 200 is Rs 2.50 and Rs 1.50 respectively. The satta bazar appear unsure about Congress returning to power in the 2019 Lok Sabha polls. The betting rate on Congress bagging 71-80 seats is 60 paise.

Congress winning more than 100 seats and 200-225 seats have Rs 1.25/1 and Rs 2.25/1 odds. Earlier, Earlier, Satta Bazar of Hapur said that PM Narendra Modi is expected to be in a weaker position compared to 2014. gamblers have predicted a major loss for the BJP in Uttar Pradesh where it had bagged 71 of the 80 Lok Sabha seats in the 2014 Lok Sabha polls.

(The above story first appeared on LatestLY on May 09, 2019 06:03 PM IST. For more news and updates on politics, world, sports, entertainment and lifestyle, log on to our website latestly.com).