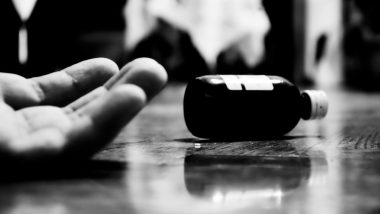 Jhansi, June 4: A 20-year-old youth and 15-year-old girl, who had consumed poison in an apparent suicide pact, are now out of danger.

The couple, both from Mahoba, had consumed poison in Lalitpur district, late on Wednesday night when they were being taken back to their families by the police.  Uttar Pradesh: Couple Commits Suicide by Consuming Poison in Bareilly

The two had been staying in Lalitpur with an acquaintance after running away from their homes.

The couple was rushed to the community health centre (CHC) Talbeth, from where they were referred to Jhansi Medical College where their condition is said to be stable.

The youth, identified as Santosh, had eloped with a minor girl from Charkhari area of Mahoba district a few days ago. They were planning to marry each other.

The parents of the girl had lodged a report of abduction, after which the Mahoba police started a hunt for the girl. They put the mobile of the girl on surveillance and found its location in Lalitpur district.

A team of Mahoba police went to the village on Wednesday and apprehended both of them.

While returning, as the police vehicle carrying them reached Talbeth, the couple somehow managed to consume the poison they were carrying with them. As they started losing consciousness, police got alerted and took them to the nearby CHC, from where they were referred to Jhansi Medical College.

SP Lalitpur Pramod Kumar said they did not know about the presence of Mahoba police that took the couple without informing their counterparts in Lalitpur.

"They are out of danger and will be discharged in a day or two," he added.

(The above story first appeared on LatestLY on Jun 04, 2021 12:55 PM IST. For more news and updates on politics, world, sports, entertainment and lifestyle, log on to our website latestly.com).