Three wagons of a goods train derailed at Outer Shikohabad railway station in Firozabad district following which rail traffic was disrupted for a few hours. 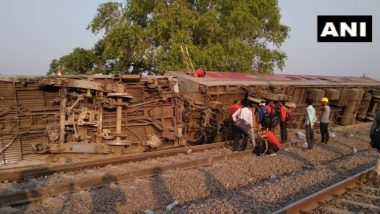 About 12 trains, running between Kanpur and Delhi, were affected by this accident on Saturday on the Delhi-Howrah route. There were, however, no reports of casualties.

The goods train was coming from Firozabad to Shikohabad. The movement of several trains, including Jodhpur-Howrah Express, Gomti Express and Bihar Sampark Kranti was affected for hours due to the derailment.

(The above story first appeared on LatestLY on Jun 14, 2020 08:09 AM IST. For more news and updates on politics, world, sports, entertainment and lifestyle, log on to our website latestly.com).