Every year Vishwakarma Jayanti is celebrated on September 17 in Indian states like Karnataka, Assam, West Bengal, Bihar and Uttar Pradesh by performing puja. 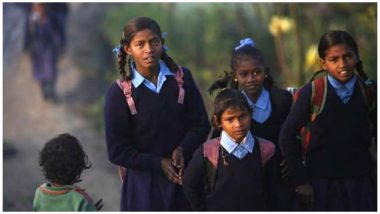 Uttar Pradesh, September 17: On the occasion of Vishwakarma Puja, the holiday has been scrapped for all government primary schools in Uttar Pradesh this year. According to a News18 report, till last year, schools had a holiday to mark the birth anniversary of Maharaj Vishwakarma on this day.

UP’s Basic Shiksha Parishad Secretary Ruby Singh, in a letter has asked all basic education officers has asked schools to be open on September 17, so that they can hold programmes and educate students about the teachings of the Maharaj. The government officials said that the celebrations will take place in schools for the first time. Vishwakarma Jayanti 2018 Date: History, Significance, Auspicious Puja Time & Vidhi to Mark the Birth of God of Architecture.

Every year Vishwakarma Jayanti is celebrated on September 17 in Indian states like Karnataka, Assam, West Bengal, Bihar and Uttar Pradesh by performing puja. He is said to be the creator of the world and the one who created many magnificent weapons for the gods and thus is also known as the divine carpenter.

(The above story first appeared on LatestLY on Sep 17, 2018 09:54 AM IST. For more news and updates on politics, world, sports, entertainment and lifestyle, log on to our website latestly.com).