Kylie's new pictures with Travis have left fans wondering if the couple has patched up for good but we are busy obsessing over her new Givenchy outfit. 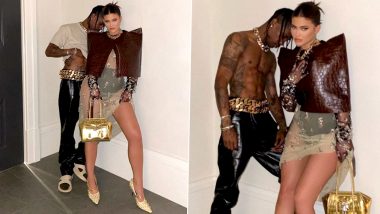 Kylie Jenner's new Instagram upload sees her posing with beau Travis Scott and it's after a really long time. While fans are speculating if the couple has reunited and buried all their past differences, we can't help but stare with awe at her new Givenchy outfit. Kylie and Travis' new pictures together are garnering enough attention but the thing that has captured our eyeballs is the new 'wow' collection by Givenchy. It's stunning, looks ravishing and Kylie definitely managed to accentuate it further. Most Liked Picture on Instagram Isn’t Kylie Jenner’s Baby Stormi Webster’s First Pic, It Is of an Egg, Here’s Beauty Queen's Hilarious Reaction.

Kylie's sheer embellished dress, when paired with a black leather jacket, looked jaw-dropping on her! She further accessorised her look by pairing it with a golden handbag and yellow pumps and needless to say, it defined perfection. Kylie's sister, Kendall had earlier modelled for this new collection by the brand and she was equally smitten by this new range. Kylie and Travis coming together for these new pictures will only an additional mileage to the brand's new designs. Kylie Jenner's Charming Pink Outfit is all Fine But Let's Not Ignore her Cute Little Matching Handbag (View Pics).

dress up with @matthewmwilliams @givenchyofficial 🤍 this collection is wow 🤤🤤 congrats !!! can’t wait to see more. ✨✨

It was in 2019 when Kylie had confirmed her separation from Travis while suggesting that they'll now focus on co-parenting their daughter Stormi. While we heard reports of him cheating on her with a model named Rojean Kar, he clarified it by saying those were baseless rumours and there was no truth to it. Kylie's fans are certainly excited to see her back with Travis but if the couple has really patched up, is for them to announce. We do not want to speculate anything 'cos the truth may disappoint later on.

(The above story first appeared on LatestLY on Oct 18, 2020 12:48 PM IST. For more news and updates on politics, world, sports, entertainment and lifestyle, log on to our website latestly.com).