Celebrated fashion designer, Satya Paul passed away. He was 79. Paul’s demise was confirmed by the Isha Yoga Centre, who also noted that he suffered a stroke in December and was recovering in a hospital, before he moved to the centre. 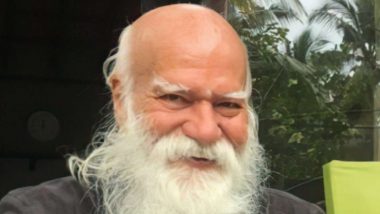 Satya Paul, a celebrated fashion designer who was credited for reinventing sarees in the contemporary age, breathed his last at Coimbatore’s Isha Yoga Centre—his home since 2015. He was 79. Paul’s demise was confirmed by the centre, who also noted that he suffered a stroke in December and was recovering in a hospital, before he moved to the centre. It is a huge loss for the fashion world, and fans across the country have taken to Twitter to pay their condolences. #RIPSatyaPaul and more hashtags are trending on the microblogging platform, with people remembering his great works and praying for his soul rests in peace. Pierre Cardin, Iconic French Fashion Designer, Dies Aged 98.

Paul founded the eponymous Indian designer label ‘Satya Paul’ in 1985. The brand, present across the country is known for its indigenous prints. The product line comprises women’s designer wear, mostly saris, kurtas, handbags, clutches and scarves and men’s accessories such as neckties, belts, cufflinks and more. The patterns, geometrics of graphic and details entail the rich history of the country, and behind every collection, there is a story. No one could ever match the brilliance of his designs, reminding every national of its roots. He was also devoted to seeking spirituality.

Designer Divyam Mehta, who lost his maternal uncle, took to social media as noted by TOI, “My maternal grandfather was in the business of restaurants and it was my uncle who introduced textiles, design and fashion to the family. My uncle, Satya Paul, took up textiles and fashion. He was always very forward in his thinking and when I told him that I want to pursue fashion designing, he stood by me, guiding me in the right direction. He did not want me to be his shadow, but he wanted me to carve my own path.” Fans of the celebrated designer mourned his death and paid condolences to the family. Sharbari Dutta Dies at 63, Eminent Fashion Designer Suffered a Stroke at Her Residence in Kolkata.

#SatyaPaul, a shining example of what it means to live with immeasurable passion and unrelenting involvement. The distinct vision you brought to the Indian #fashion industry is a beautiful tribute to this. A privilege to have had you amongst us. Condolences & Blessings. -Sg pic.twitter.com/DNMZ0DXvOf

His Designs Will Always Be Celebrated

Om shanti Satya Paul. Coveted his sarees in my teens and bought one as a gift for amma with my internship money!

Paul’s designs define the rich history of our country, which most of us tend to forget. He was a revered name in the industry and will always be remembered, and his work will be celebrated for generations.

(The above story first appeared on LatestLY on Jan 07, 2021 01:46 PM IST. For more news and updates on politics, world, sports, entertainment and lifestyle, log on to our website latestly.com).