Dussehra 2020: From Seeing Neelkanth to Getting Sona Patta Auspicious Things Done on Vijayadashami That Bring in Good Luck & Prosperity

"Neelakanth Tum Neele Rahiyo, Doodh-Bhaat Ka Bhojan Kariyo, Hamaree Baat Raam Se Kahiyo" which translates to Neelkanth (the bird), you stay blue, eat milk and rice, tell our conversations to Lord Ram ', this folklore reveals that the Neelkanth bird is the messenger of God and therefore seeing this birth on Dussehra is considered extremely lucky. 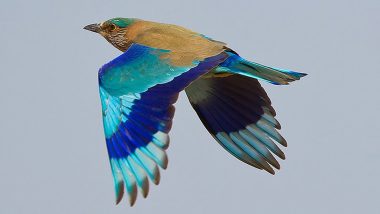 Dussehra also called Dassara, Dusshera or Vijaydashmi is an important festival of amongst the Hindus and it ends the 9-night long Navratri festival that worships ma Durga. It is the symbol of victory of truth over lies and good over evil. It is believed that on this day lord Sri Rama killed 10-headed ungodly Ravana on the day of Dashami. Not only this, Maa Durga killed a demon named Mahishasura and freed the gods from its terror. Vijayadashami is celebrated on the 10th day after the nine days of Navratri (Navratri) as a celebration of the victory of the nine powers.

"Neelakanth Tum Neele Rahiyo, Doodh-Bhaat Ka Bhojan Kariyo, Hamaree Baat Raam Se Kahiyo" which translates to Neelkanth (the bird), you stay blue, eat milk and rice, tell our conversations to Lord Ram ', this folklore reveals that the Neelkanth bird is the messenger of God and therefore seeing this birth on Dussehra is considered extremely lucky. Seeing this bird on Dussehra festival is considered auspicious because of which every person on the day of Dussehra goes to the roof and watchers towards the sky so that they can see the Nilkanth bird. It is said that spotting Neelkanth on this day increases the wealth and wealth of the house, and fruitful and auspicious works continue in the house continuously. If you see Neelkanth at any time from morning to evening, then it is auspicious for the viewer.

It is believed that Lord Shriram had prayed for his victory by praying in front of the Shami tree before invading Lanka. Lord Shri Ram touched these leaves, hence it was believed that the leaves of Shami gave blessings of happiness, prosperity and victory on the day of Vijayadashami. Over time, it was compared to gold aka known as sona patta and it is exchanged for the wishes of Dussehra, saying that may these leaves bring in good luck and prosperity in your life.

It might sound unusual but it is said that if on this day you eat sponge gourd aka gilki, turai or nenua, it is considered good luck. Yes, eating this green veggie in form of pakodas is considered auspicious.

Shami worships is extremely important for Kshatriya. The Shami tree is worshipped on the Dussehra day in Pradosh Kaal. The Pandavas are said to have hidden their weapons at the time of the Mahabharata war on the Shami tree, which won them the battle. However, Shami is considered a symbol of perseverance and sharpness.

(The above story first appeared on LatestLY on Oct 24, 2020 03:04 PM IST. For more news and updates on politics, world, sports, entertainment and lifestyle, log on to our website latestly.com).