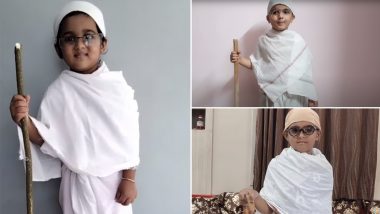 Gandhi Jayanti is observed every year on October 2 to mark the birth anniversary of the ‘Father of the Nation’, Mohandas Karamchand Gandhi. Mahatma Gandhi led the Indian freedom movement against British colonisation. His non-violent means of fighting against the British East India Company inspired many across the world. Therefore, the day is also observed as the International Day of Non-Violence by the United Nations. India marks the annual observance by commemorating the great historical figure and organising various cultural events to spread his ideals of non-violence, peace and social welfare. Schools and other educational institutions put up events to remember Mahatma Gandhi on his birth anniversary. Among other activities, fancy dress competition is quite common in most of the schools that organise it on Gandhi Jayanti every year. So, if you’re looking forward to dressing your child as Mahatma Gandhi this year, you’ve come up at the right place. Below, watch DIY video tutorials to get wonderful ideas for dressing your child as Bapu.

If you want your child to participate in the fancy dress competition on that day, prepare in advance all the materials that would go behind creating a Mahatma Gandhi costume. From glass-less round spectacles to a white cotton dhoti, here’s everything you’d require to make your child look like Bapu. You can also prepare the bald get-up by using some DIY ideas that are too easy to make. Do not forget the janeo that can be tied on the child’s torso to complete his look for Gandhi Jayanti. Get inspiration from these tutorial videos for Gandhi Jayanti 2022 fancy dress competition ideas. Scroll down and watch the clips to learn more! October 2022 Holidays Calendar With Major Festivals & Events: List of Important Dates and Indian Bank Holidays for the Tenth Month.

While Gandhi Jayanti 2022 falls on Sunday, the fancy dress competition can be held prior to the momentous day! So, ensure that you prepare well in advance about everything you need to dress your kid as Mahatma Gandhi. Avoid any last-minute hassle by keeping it all-ready as soon as possible!

(The above story first appeared on LatestLY on Sep 29, 2022 03:58 PM IST. For more news and updates on politics, world, sports, entertainment and lifestyle, log on to our website latestly.com).