International Men's Day 2021 Date, Theme & Significance: When Is Men's Day? Everything You Need to Know About the Special Day 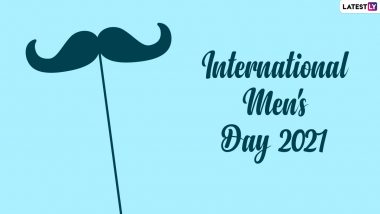 International Men's Day is mainly celebrated to focus on the health of men and boys, improve gender relations, promote gender equality and highlight male role models. According to the website of International Mens Day, 3 times more men commit suicide than women in the world. One in 3 men is a victim of domestic violence. Males die 4 to 5 years earlier than females. Men are twice as likely to suffer from heart disease as women. Men's Day works on the positive aspects of the identity of men.

(The above story first appeared on LatestLY on Nov 18, 2021 12:44 PM IST. For more news and updates on politics, world, sports, entertainment and lifestyle, log on to our website latestly.com).