Jagadhatri Puja 2020: When Is Jagaddhatri Pujo? Why Is the Festival Celebrated? Signifiance of Akshaya Navami and All Frequently Asked Questions Answered 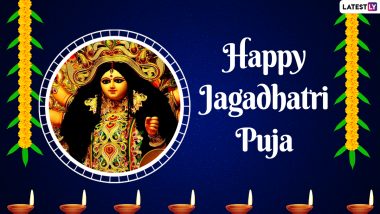 Jagadhatri—the ‘Protector of the World,’ is an aspect of Hindu goddess Durga. She is worshipped on Goshtastami, coinciding with the festival of Akshaya Navami. Jagadhatri Pujo, also spelt as Jagatdhatri and Jagaddhatri Pujo is celebrated with equal enthusiasm as Durga Puja, especially in Bengal and Odisha. Jagaddhatri Puja 2020 is on November 23, and there are a lot of significant questions, one might have related to the festival. After all, only a few people, except for those who live in Bengal and Odisha, know about Jagaddhatri Pujo. Why is the festival celebrated? What is the significance of Jagadhatri Puja? Who started the festival? And so on. In this article, we bring you all the Frequently Asked Questions (FAQs) and the answers so that you get a better idea about the festival day.

Jagadhatri Puja is observed on the auspicious occasion of Akshaya Navami, in the Hindu month of Kartik. For 2020, the festival is on November 23.

Who Started the Celebration of Jagaddhatri Puja?

According to the Hindu legends, Jagadhatri Puja was first started by Raja Krishnachandra of Krishnagar, Nadia in Bengal. It is believed that the king was arrested by Nawab Siraj-ud-Dullah paying the tax dues during this time. He was released on the last day of Durga Puja, Vijaya Dashami, because of which the festival celebration in his kingdom could not be celebrated grandly. Upon his return, Raja Krishnachandra started the ritual of Jagaddhatri Puja, which is observed with an equal thrill of Durga Puja.

Why is Jagaddhatri Puja Celebrated?

Jagadhatri Puja is celebrated to worship Goddess Jagadhatri, who is believed to be a calmer and more serene incarnation of the fierce Goddess Durga. She is depicted as a four-handed goddess bearing a conch, bow, chakra and a five-pronged arrow, sitting on a tiger.

Goddess Jagadhatri is an aspect of the Hindu goddess Durga. Her cult is directly derived from Tantra, where she is a symbol of sattva beside Durga and Kali, respectably symbolised with Rajas and Tamas.

Where is Jagadhatri Puja Celebrated?

Though she is worshipped across West Bengal and some places in Odisha, Jagadhatri Pujo in Chandannagar, Krishnanagar, Boinchi, Bhadreswar, Hooghly, Rishra, Ishapore, Tehatta, Ashoknagar Kalyangarh, and Baripada, have a special socio-cultural celebration. The Jagadhatri Pujo in Ramakrishna Mission is another treat to witness.

These some of the significant things you may not have known attached to the celebration of Jagaddhatri Puja. Devotees worship the goddess to seek her blessings for a healthy, happy and prosperous life.

(The above story first appeared on LatestLY on Nov 22, 2020 07:46 PM IST. For more news and updates on politics, world, sports, entertainment and lifestyle, log on to our website latestly.com).