Muharram 2021 in Iraq: From Date to Ashura Significance for Shia Muslims, Know Everything About the First Islamic Month

Muharram, the first month in Islamic calendar, assumed extra significance in Iraq where Shia Muslims make up the majority of the Iraqi population. 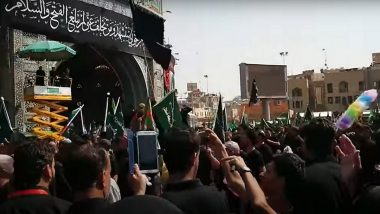 Baghdad, August 5: Muharram, the first month in Islamic calendar, assumed extra significance in Iraq where Shia Muslims make up the majority of the Iraqi population. During the first 10 days of Muharram, Shias mourn the martyrdom of Hussain, the grandson of Prophet Mohammed, by self-flagellating. In addition, the tomb of Hussain is in Iraq's Karbala. Therefore, Muharram matters a lot for Muslims in Iraq. Scroll down to know likely date for Muharram 2021 beginning in Iraq and its significance. Is Muharram Celebrated as Festival? Why Do Muslims Self-Flagellate on Ashura? When Will Muharram Chand Appear? All FAQs Answered.

When Is Ashura in Saudi Arabia?

Muharram and Ashura Significance in Iraq:

The Battle of Karbala, during which Hussain, an important figure in Islam and the third Shia Imam, was martyred, was fought in Muharram month. Ashura (10th day of Muharram) is the day when Hussain and his family members attained martyrdom. Hence, Muharram and Ashura are significant for Shia Muslims. While Muslims worldwide remember Hussain and his sacrifices, Shias flagellate themselves to commemorate the martyrdom of Hussain. They cut themselves with swords, knives and sharp chains to emulate the suffering of Hussain.

(The above story first appeared on LatestLY on Aug 05, 2021 05:33 PM IST. For more news and updates on politics, world, sports, entertainment and lifestyle, log on to our website latestly.com).