Nunavut Day 2021: Why Is Nunavut Day Celebrated? From Date, History and Significance, Here's Everything You Need To Know About This Canadian Statutory Holiday

On July 9, 1993, the Canadian parliament passed an act that where the Nunavut territory became part of Canada. Nunavut Day is celebrated on July 9 every year in observance of the day the Parliament of Canada passed two Nunavut Acts 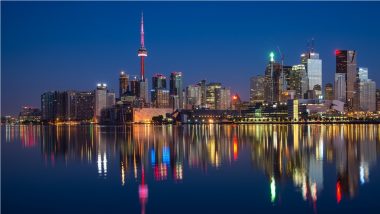 Nunavut Day is celebrated on July 9 every year in observance of the day the Parliament of Canada passed two Nunavut Acts - The Nunavut Land Claims Agreement Act and the Nunavut Act.  The region of Nunavut in Canada is occupied by the Inuit tribe -a member of an indigenous people of northern Canada and parts of Greenland and Alaska. This land is a place of great cultural significance which can be seen depicted in their artwork, clothing, and customs. Nunavut translates to “our land” in the native Inuktitut language. Canada's First Indigenous Governor General Pledges to Help Heal Nation.

Why Is Nunavut Day Celebrated?

On July 9, 1993, the Canadian parliament passed an act that where the Nunavut territory became part of Canada. The Nunavut Land Claims and the act allowed the Inuit population in the region to have a greater say and agency over their lives and paved the way to preserve their values and history. Nunavut Day is a great time to highlight the cultural significance of the Inuit population who have lived in the cold, arctic climates for thousands of years. The Canadian government finally recognising their heritage through the Nunavut Act means a great deal to this indigenous population.

What is the Significance of Nunavut Day?

Presently, Nunavut Day is celebrated on July 9. However, the genesis of the first celebrations of this day can be traced back to April 1, 2000. It was then decided that the day should be moved to July 9, since The Nunavut Land Claims Agreement Act of 1993 held greater significance for the Inuit population. Nunavut Day is a statutory holiday in Canada. On Nunavut Day, people in Canada pay homage to the Inuit population by observing their traditions by organising many cultural activities and events that are held throughout the day that signifies the cultural heritage of these Indigenous populations.  Nunavut celebrations also include community-wide breakfasts, partaking in traditional food, organising traditional dancing, games.

(The above story first appeared on LatestLY on Jul 08, 2021 03:02 PM IST. For more news and updates on politics, world, sports, entertainment and lifestyle, log on to our website latestly.com).