St. George’s Day 2022: Date, History, Facts and Significance of Observing the Death Anniversary of the Patron Saint of England

St. George’s Day is observed on April 23 every year, to mark the death of the patron saint of England. A feast day of St George has been celebrated in England for hundreds of years on the same date, which was possibly the date of his martyrdom. 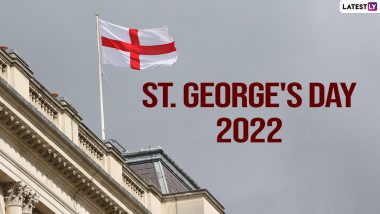 St. George's Day acknowledged as the Feast of Saint George is an annual observance that is marked by various Christian Churches and by several nations, regions and states that had Saint George as the patron. Saint George is associated with a large number of patronages throughout the world, and his iconography is featured on the flags and coats of arms of a number of cities and nations. St. George's Day 2022 will be observed on Saturday, 23rd April as the anniversary of his death in 303 AD. The day is considered an important holiday in England and is observed with feasts, dancing and a strong sense of national pride. Reportedly, St George's Day flag will be draped over the Council House on Friday, April 22 in England. April 2022 Holiday Calendar With Major Indian Festivals and Events: Chaitra Navratri, Ramadan, Good Friday; Check List of All Important Dates and Bank Holidays for the Month.

The feast of Saint George is not a public holiday and education institutions, shops, post offices, businesses and other organizations are open as usual. However, if the day falls between Palm Sunday and the Sunday after Easter Day then the dates are transferred after the holy week's observances, as per the rules of England's churches. Like many saints, St. George was described as a martyr after he died for his Christian faith. The story behind how he became the patron saint of England goes back to the unforgettable battle he fought against a dragon who had a taste for humans. The patron saint killed the dragon, saved the princess and gave the people of Silene access to water. In gratitude, they converted to Christianity.

People observe St. George's Day by hoisting the English flags out of their homes and offices, dress up in blue colour as the hue was said to be his favourite. Some folks also pin a rose blossom to their lapel or breast pocket as it is considered a symbol of St. George's death and sing hymns of Jerusalem written by English poet William Blake. Apart from St. George’s Day, several other holidays are devoted to him, including April 23 and a few in November and December.

(The above story first appeared on LatestLY on Apr 22, 2022 06:00 PM IST. For more news and updates on politics, world, sports, entertainment and lifestyle, log on to our website latestly.com).