People across the globe are observing World Rainforest Day 2021 on June 22 to raise awareness about the preservation of pristine natural resources. 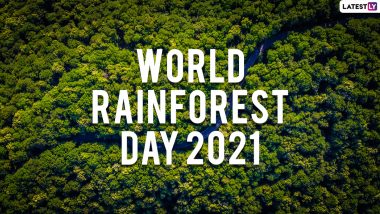 The day is also celebrated to create and raise awareness among the masses regarding the preservation of pristine ecological spaces. The rainforests play an important role in maintaining the climate balance on Earth. They also provide us with many resources like fresh water and clean air by absorbing harmful gases including carbon dioxide. The tropical rainforests are called the ‘World’s Largest Pharmacy’ because people have discovered over one-quarter of natural medicines from there. They are also responsible for 28 percent of the world’s oxygen turnover. However, as per worldrainforestday.org, due to deforestation as an area, as much as 1 billion hectares from tropical forests have been destroyed.

The Theme of World Rainforest Day 2021

This year, the theme of World Rainforest Day has been finalised as ‘Protected Together. Now. Forever.’

In 2017, the very first World Rainforest Day was celebrated on June 22. It was introduced through the efforts and collaboration of groups called the Rainforest Partnership. The main objective behind the move was to save the world’s rainforests, which are a crucial part of the ecosystem.

To promote methods and strategies for the preservation of rainforests people across the globe unite on this occasion as a part of various events and campaigns.

Although, this year physical events will not be held due to the ongoing COVID-19 pandemic. But people have been asked to participate in virtual events to highlight the importance of saving the world’s rainforests.

(The above story first appeared on LatestLY on Jun 22, 2021 10:58 AM IST. For more news and updates on politics, world, sports, entertainment and lifestyle, log on to our website latestly.com).