Holy Cheers! Ahead of the Holiday Season 2020, Bars & Pubs in UK Apply to Register As ‘Place of Worship’ so They Can Reopen Amid Lockdown Tier 3 Restrictions

Two bars and pubs in the United Kingdom have reportedly applied to be classed as ‘Place of Worship’ so that they can stay open. 400 Rabbits and Mezcal Cocktail Bar in Nottingham and the New Baron of Hinckley in Leicestershire applied for the same to point out the 'unfairness' in the tier 3 restrictions. 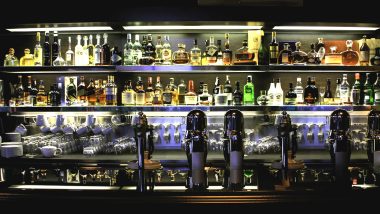 Two bars and pubs in the United Kingdom have reportedly applied to be classed as ‘Place of Worship’ so that they can stay open. The reports surfaced after the country entered its lockdown tier 3 phase. At present, The New Baron of Hinckley in Hinckley, Leicestershire is only allowed to stay open for takeaway. However, places of worship are allowed to open for services in the UK and private across all the three tiers of the COVID-19 restrictions. The pub applied for the venue to be registered as a religious meeting, after reports of a tequila bar, 400 Rabbits and Mezcal Cocktail Bar in Nottingham did the same thing. Both the places applied to get registered, ahead of the holiday season, when the hospitality sectors are in huge demand. Besides, the owners of the businesses highlight the ‘unfair’ restrictions faced by hospitality venues.

James Aspell, owner of 400 Rabbits in Nottingham, pointed out the ‘hypocrisy’ of COVID-19 rules in the UK. He reported that he had submitted an application to Nottingham’s register general to reopen the bar as The Church of 400 Rabbits. “We think the tier restrictions announced last week and how they're targeted at hospitality businesses like mine seems incredibly unfair. It could be months before we're allowed to open again,” he was quoted saying in a BBC report. Aspell added that the list of restrictions is mainly unfair towards the hospitality business. Other occupations are allowed to stay open. He further pointed out that in Nottingham, the government has even allowed the Christmas market to go ahead, where there will be obvious gathering of crowds. “So we've decided to have a bit of fun with it but the main reason is to shine a light on the ridiculousness of the rules themselves,” he adds.

The Elmesthorpe Brewery Company, which owns The New Baron of Hinckley, in Leicestershire, followed the same route. If successful, the pub will be christened The Church of New Baron, with patrons to be known as New Baronials, while owner Nirad Solanki, or Father Niri, would lead the flock. Bar staff would be known as Baronnuns. “Our pub is the epicentre of Hinckley. A lot of people depend on it, especially the older people. I thought, if churches and synagogues can open, why not do this?” owner Solanki was quoted saying in Daily Mail report. Despite the jovial nature of the application, he noted that it “points out the hypocrisy” of the coronavirus measures in UK. “We have no intention of opening unless the application is granted or when restrictions are lifted. If we were to open we'd follow government guidelines and I don't think we'd be selling alcohol. We might be able to adapt in a different way and have some fun with it,” he concluded. Huge Crowds Spill Out of Pubs and Gather for ‘Impromptu Party’ in UK Streets.

The applications were applied by the venues under the Places of Worship Registration Act 1855. Meanwhile, the UK government guidelines for Tier 3 areas state hospitality settings, such as bars (including shisha venues), pubs, cafes and restaurants are closed, and they are allowed to continue sales by takeaway, click-and-collect, drive-through or delivery services.

(The above story first appeared on LatestLY on Dec 05, 2020 01:12 PM IST. For more news and updates on politics, world, sports, entertainment and lifestyle, log on to our website latestly.com).