Meghan Markle Opens Up On George Floyd’s Death, Terms The Current Scenario In The US As ‘Devastating’

Duchess of Sussex, Meghan Markle delivered an emotional speech to the Class of 2020 at her former high school in Los Angeles. The topic which she chose to speak on was the ongoing mass movement over George Floyd’s death. Read on. 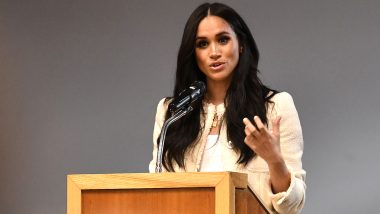 Duchess of Sussex, Meghan Markle delivered an emotional speech to the Class of 2020 at her former high school in Los Angeles. The topic which she chose to speak on was the ongoing mass movement over George Floyd’s death. Markle addressed the students via a video and expressed how she felt sorry for them to breath in a world where racism is part and parcel of life. She also added how the current scenario in the United States is 'devastating'. Prince Harry and Meghan Markle 2nd Wedding Anniversary: Pictures From the Royal Wedding of Duke and Duchess of Sussex to Relive Their Fairytale Moment.

“The first thing I want to say to you is that I’m sorry. I’m so sorry you have to grow up in a world where this is still present," said Markle, adding “what is happening in our country” is “absolutely devastating."

Not just this, Markle also recalled her own memories of the LA riots in 1992. "Those memories don't go away and I can't imagine that at 17 or 18 years old, which is how old you are now, that you would have to have a different version of that same type of experience," she said. "That's something you should have an understanding of, but an understanding of as a history lesson not as your reality. So I'm sorry that in a way we have not gotten the world to the place you deserve it to be," Markle said. Prince Harry And Meghan Markle's Second Wedding Anniversary: It All Began With A Blind Date.

For the unversed, if you happen to be part of the British royal family, you cannot have political views. However, Meghan and Harry in March had stepped down from their official royal roles and are currently residing in Los Angeles with their baby son Archie. Stay tuned!

(The above story first appeared on LatestLY on Jun 05, 2020 09:29 AM IST. For more news and updates on politics, world, sports, entertainment and lifestyle, log on to our website latestly.com).