Qantas Airlines' 7-Hour 'Flight to Nowhere' Sells Out in 10 Minutes! Know About This Emerging Travel Trend Becoming Popular Amid The Pandemic 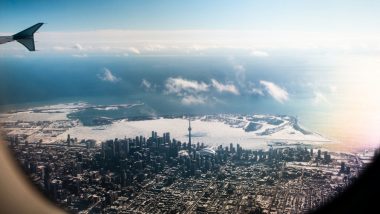 When was the last time you travelled? We know that question hurt as you make plans about your next travel destination and hoping for things to get back to normal. But traveling post the pandemic will be a lot different with social distancing likely becoming a norm all around the world. But to cater to people who miss traveling and simply the joy of flying is a new trend of "flights to nowhere." Qantas Airlines' demonstrated the popularity and urge for people to travel after their seven-hour flight to nowhere sold out in 10 minutes! Most Scenic Flight Routes in the World: These Are Other Beautiful Aerial Flight Views in the World.

Called the "Great Southern Land" scenic flight, the seven-hour flight will fly over iconic destinations across Australia where there are no border restrictions. B787 Dreamliner reserved for long international flights, which has biggest windows on any passenger aircraft will be used for this flight. The scenic route includes flying over Queensland, the Northern Territory and New South Wales including the Great Barrier Reef, Uluru, Kata Tjuta, Byron Bay and iconic Sydney Harbour. The flight departs on October 10. Soon after the announcement, it took just about 10 minutes to get fully booked. Qantas CEO Alan Joyce said in a statement, "It's probably the fastest selling flight in Qantas history." Adding that they will do a lot more of these flights seeing the rise in demand. Want to Work From Home by The Beach? Bermuda Islands is Offering Year-Long Stays For Remote Workers, Know How to Apply.

This brings us to the point where "flights to nowhere" could be the part of new normal in a post-pandemic world. Given that each country is fighting its own battle with COVID-19 there are a lot of border restrictions for international travel. A flight to nowhere is a concept that prioritizes the journey over a destination. People can experience the thrill of flying and just watching down on the beauty of the wonderful from the skies. Rio de Janeiro to Introduce App to Book Socially-Distant Place on the Sand for Tourists After Spain Opts For Drones as Safety Measure Amid COVID-19 Pandemic.

Qantas is not the first one to offer the service. On August 8, EVA Air offered a journey on its Hello Kitty-themed A330 Dream jet in Taiwan. It was a three-hour flight that took off from Taipei Airport and returned to the same spot after circling the skies. Passengers saw the views of Taiwan's attractions and some nearby islands from their plane windows. Another scenic flight will be flying from Taiwan over the Jeju island just tomorrow, September 19.

As per local newspaper Strait Times, Singapore is also considering this option of introducing flights to nowhere. Each flight would be around three hours but nothing has been announced as yet.

As world over people wait to travel and explore like before, the immediate wanderlust could be satisfied by just sitting in a plane and enjoying the window views. Looks like travelling to nowhere can also rise into a "destination" in the next few months.

(The above story first appeared on LatestLY on Sep 18, 2020 05:17 PM IST. For more news and updates on politics, world, sports, entertainment and lifestyle, log on to our website latestly.com).