Aditya Tiwari, India's Youngest Single Dad Who Adopted Child With Down Syndrome to be Felicitated As 'World's Best Mommy' on Women's Day 2020 Event

In Bengaluru's Wempower, an event to mark International Women’s Day, Pune resident Aditya Tiwari will be honoured as the "World’s Best Mommy". Back in 2016, Tiwari became India's youngest single dad who adopted a child with special needs. Tiwari adopted his son Avnish who has Down Syndrome. 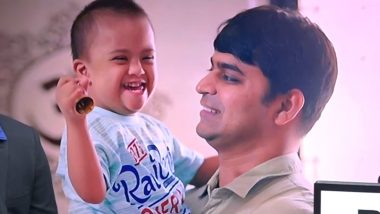 International Women's Day 2020 will be observed on March 8. On this day, women from different fields will be honoured for their achievements in various events. In Bengaluru's Wempower, an event to mark International Women’s Day, Pune resident Aditya Tiwari will be honoured as the "World’s Best Mommy". Back in 2016, Tiwari became India's youngest single dad who adopted a child with special needs. Tiwari adopted his son Avnish who has Down Syndrome. He will also be a part of a panel discussion and speak about his experience of raising a child with special needs. Baby With Down Syndrome Playfully Rubbing Spaghetti on His Belly Is the Cutest Ever, Watch Adorable Video.

Aditya Tiwari works as a software engineer and at the age of 28, he decided to adopt a child. After crossing through several legal hurdles and convincing his parents he was able to get custody of the boy. After Avnish entered his life, Tiwari quit his job and focussed on counselling guiding and motivating parents with special children. With Avnish constantly by his side, the father-son duo have toured 22 states and have held meetings, workshops, conferences and talks at nearly 400 locations. He was quoted to Indian Express, "We are connected to 10,000 parents around the world. We were also invited by the United Nations to participate in a conference and throw light on ways to bring up children with intellectual disabilities." Now, Avnish is studying at a school on Balewadi and enjoys dancing, music, photography and playing instruments. Francesca Rausi, 4-Year-Old Model With Down Syndrome Is Winning Hearts on the Internet! Check Heart-Melting Pictures Of The Star.

Aditya has also brought an important reform, to make a separate category for intellectually disabled children and give them disability certificates. Avnish was diagnosed with two holes in his heart and his parents had decided to abandon him as he would bring embarrassment to the society because of Down Syndrome. Now without any medical intervention, the holes have disappeared, but he still needs to undergo two crucial surgeries. With his story, he has given inspirational talks about adoption at several places and forums. And the duo is preparing for another counselling session for parents with special needs children. Aditya Tiwari serves a wonderful example of a mother's love

(The above story first appeared on LatestLY on Mar 06, 2020 10:47 AM IST. For more news and updates on politics, world, sports, entertainment and lifestyle, log on to our website latestly.com).