An author and Twitter user, Keerthik Sasidharan shared AI images of legendary Indian revolutionary leaders, and activists. The AI images had startled netizens, and the viral Twitter thread will surely give you goosebumps, if you haven’t seen it yet. 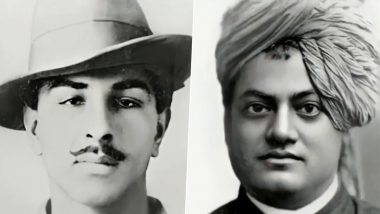 Bhagat Singh, Swami Vivekananda, Kasturba Gandhi, Sri Aurobindo and others, freedom fighters during the pre-independence era and their struggle to gain freedom for the country are significantly revered. Their courage, intelligence and everything about them make them a true inspiration to many. But did you ever imagine how animated images of these leaders would look like? The most impressive recent advancements in photography, have given us the opportunity to reimagine the world, also allowing us to revisit history. An author and Twitter user, Keerthik Sasidharan, seems to make it possible by sharing AI images of legendary Indian revolutionary leaders, and activists. The AI images had startled netizens, and the viral Twitter thread will surely give you goosebumps, if you haven’t seen it yet.

Kind of surreal to take a photo of the singularly inspiring Bhagat Singh -- a revolutionary voice in 1920s India, who was hung by the British in 1931, at the age of 24 -- run it through the Heritage AI algorithm, and see him reanimated. pic.twitter.com/CfC0Gu6Gxk

Swami Vivekananda probably would have laughed at such algorithmic efforts to reanimate photos, but as a great believer in the powers of science to improve material aspects of human lives, he would have probably wanted to understand the details of how it all works. pic.twitter.com/3zFu9suGar

It was hard to find a quality photo of Lokmanya Tilak, but this worked. Tilak urgently deserve a new reappraisal as one of the founding fathers of the modern Indian mind. A reformist & revivalist of traditions, a believer in the power of mass media before most Indians could read. pic.twitter.com/M93KWkR6bc

A young Kasturba Gandhi -- again, high quality photos are hard to come by -- here, probably taken during her stay in South Africa (I could be wrong), where she traveled to, raised children, & discovered the contours of her own social commitments before returning to India in 1915. pic.twitter.com/THVz1zyibn

The great master and teacher Aurobindo wrote, when he was young, a revolutionary spirit, and a restless mind, nearly a century ago: "The Time has perhaps come fot the Indian mind, long pre-ccupied with political and economic issues, for a widening of its horizon." pic.twitter.com/8U9BwxoE7Z

Munshi Premchand, half bemused, at the newfangled inventions that have come up 80 years after his death. If he were alive, he would probably have used some of it--perhaps, even a novel about of a farmer who wants to buy a computer for his daughter--in his vast oeuvre of writings. pic.twitter.com/dNtm4Dh7CB

Watched it n number of times and still giving me goosebumps!🤩

I find the Bhagat Singh deeply moving and emotional. Till now he was always someone I admired intellectually for his idealism and courage but seeing him and the rest humanized hit me hard how brave they (him Azad, etc) were and much we owe him and his contemporaries.

Some Tried On Their Own

I tried doing same with some other faces using Avatarify on Python.

They came out pretty slow, I think my system lacks the good configuration for the same.

Artificial intelligence is a newly emerging field, and it requires careful creation. But it’s just the beginning, and we are learning more and more every day. Thanks to social media, these AI images seem so compelling. It’s stunning to see how software can create something so surreal, giving us a memorable experience.

(The above story first appeared on LatestLY on Feb 28, 2021 02:48 PM IST. For more news and updates on politics, world, sports, entertainment and lifestyle, log on to our website latestly.com).