Charlie Chaplin Birth Anniversary: 10 Quotes by The Comic Actor on Life That Will Inspire You to The Core

Chaplin entered the film industry and performed in 1914 for Keystone Studios. 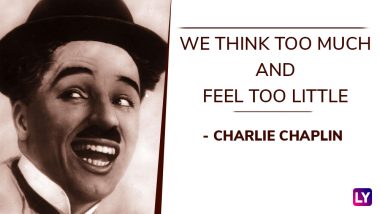 Sir Charles Spencer Chaplin, the man whose comic timing is beyond appreciation was born on April 16, 1889, in London. Charlie Chaplin who was an English comic actor, filmmaker and composer rose to fame during the times of silent film, till today, he is widely known for the same. For decades, the man made us laugh like no one else. While Chaplin is known for making us laugh in the darkest of days, his childhood was not so great.

At a young age, Chaplin's father who worked at the  London music hall entertainer went absconding and mother was sent to an asylum. He was just five when he was first introduced to the stage. While he had a tough childhood, out of sheer determination and hard work,  at the age of 19, he was signed to the prestigious Fred Karno company, which took him to America.

The actor who holds an important place in the film industry rose to fame for his screen persona "the Little Tramp". He entered the film industry and performed in 1914 for Keystone Studios. The Tramp persona gained him a large fan base that rooted his career. His career went a higher graph making him popular in the industry. Today, even 129 years after his death, the man is considered an icon.

On Charlie Chaplin's 129th birth anniversary, we take a look at 10 motivational quotes by him:

In Bollywood, Raj Kapoor earned the tag of Charlie Chaplin for the portrayal. Sridevi who was known for her versatility also played Chaplin for Mr India. Despite obstacles, Chaplin paved a way for him that let his taste the fruits of success. While it is easy to lose hope and complain about problems, this man is an inspiration of how people emerge victorious beyond difficulties.

(The above story first appeared on LatestLY on Apr 16, 2018 11:35 AM IST. For more news and updates on politics, world, sports, entertainment and lifestyle, log on to our website latestly.com).