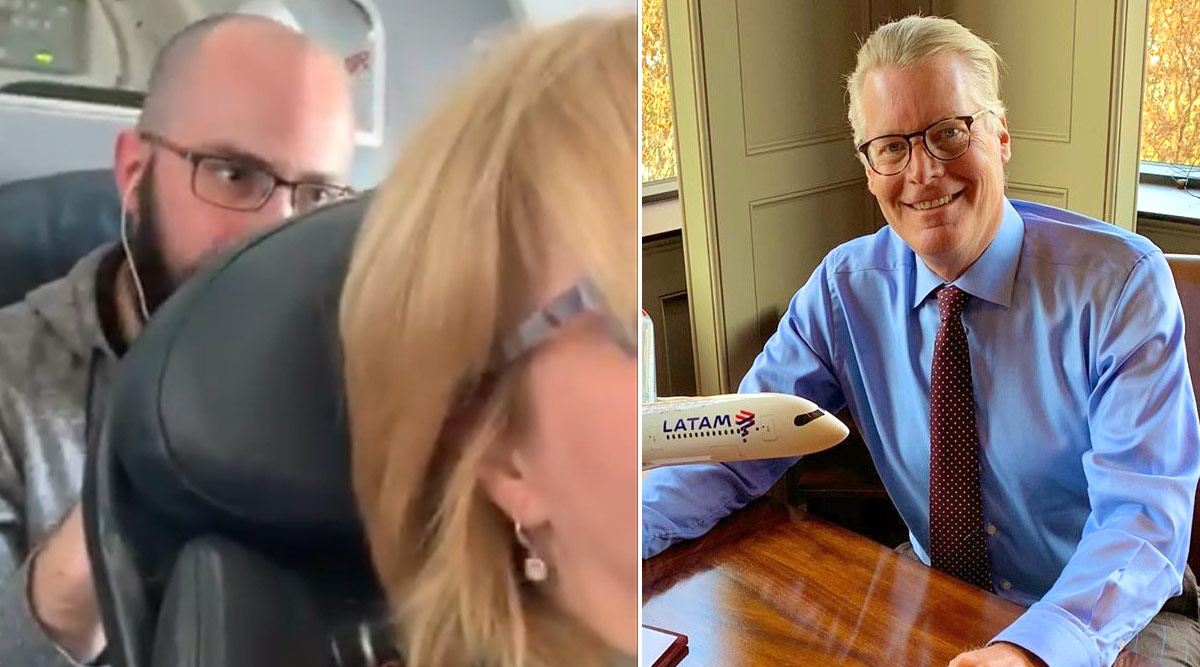 Recently, a video showing a tall man, continuously punching a woman’s reclined seat has gone insanely viral. It stirred a debate of whether a passenger should recline or not recline! Now Delta Air Lines CEO Ed Bastian has weighed in, and it seems like he thinks the woman in the video is wrong. At CNBC’s “Squawk Box” show, Bastian was asked if he is aware of this very debate that has taken the internet by storm and as a tall man that he is, what his opinion on the viral debate is. At first, Bastian said that passengers have the right to recline but added that the proper thing to do is ask for permission before leaning the chair back. His interview with the network has surfaced online, and Twitterati is divided AGAIN! Yes, the viral video which stirred the debate on if the woman or the man was doing the right thing, it has now taken a slight twist if Delta CEO’s opinion is quite practical. Passenger Dries Shoe Using Flight's Air Vent, Netizens Are Shocked.

Those who have not seen the video, it shows a passenger in the last row of an American Airlines plane, repeatedly punching the seat of the woman seated in front of him. Why? Because she reclined her seat. Some took the man’s side because tall people have knees and it is rude for the person sitting ahead of you to recline. Others took the woman’s side because she paid for the seat.

@BravoAndy Here’s a great jackhole! He was angry that I reclined my seat and punched it about 9 times - HARD, at which point I began videoing him, and he resigned to this behavior. The other jackhole is the @AmericanAir flight attendant who reprimanded me and offered him rum! pic.twitter.com/dHeUysrKTu

According to media reports, Bastian is six-foot-three, and the internet wanted to know about his opinion on to recline or not. When asked in the Squawk Box interview, the Delta CEO took the opportunity to weigh into the controversy. He said, “I never recline, because I don’t think it’s something as CEO I should be doing, and I never say anything if someone reclines into me.” He went on to clarify that though he does not recline, passengers have the right to do so, but there is an etiquette. Bastian said, “The proper thing to do is, if you’re going to recline into somebody, you ask if it’s OK first.”

"I think customers have the right to recline." $DAL CEO Ed Bastian shares his seat-reclining philosophy: If there's a tall person behind you "the polite thing is to make certain it was okay. I never recline … and I never say anything if someone reclines into me.” pic.twitter.com/JJw5DVH4QG

No. If the seats are able to recline, then you can recline them. I have a spine injury, I’m not going to ask your permission not to hurt for the duration of a flight https://t.co/VjFwKMIkF4

Hey @Delta — no! You want to create a situation where we all have to negotiate and fight with each other? Are you mad? We pay to recline. How about massive discounts when the people behind us say no? https://t.co/xU44px9TgY

There Were Few Who Agreed to Bastian!

The Delta CEO is right: We should ask before reclining in coach, because the airlines have forced us into ever-smaller spaces while pretending we can expect the same level of comfort we had in the 80s.

Which would be a great point for anyone to make other than the DELTA CEO.

All the passengers have the right to comfort, because they are paying for it. It appears like the debate is not going to take a pause anytime sooner. As of now, there is no conclusion to this argument, but we all should be co-operative with each other while flying.