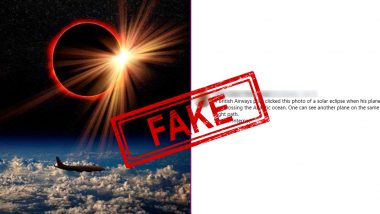 On June 21, we witnessed a wonderful annular solar eclipse. As parts of the world tuned in to watch the celestial spectacle, the internet was flooded with wonderful images and photos of the Ring of Fire sighted that day. But among them, a certain picture of the solar eclipse claimed to be taken by a British Airways pilot was shared widely. The picture was shared on Twitter, Facebook and WhatsApp with an accompanying text stating, it was taken by a British Airways pilot while flying over the Atlantic Ocean. Now as beautiful as the picture may be, it is fake. It is a digitally enhanced picture of a photograph that's at least 3 years old! Two Suns Appear on The US-Canada Border? On Annular Solar Eclipse 2020, Old Pics of Hunter’s Moon Go Viral, Once Again! Know the Truth Behind This Fake Claim.

The annular solar eclipse was a delightful spectacle for those who love watching the eclipses and such celestial occurrences. Many pictures from parts of India and as observed from around the world were shared online. But this particularly striking image showing a very close up of the solar eclipse was shared online. The caption on the photo reads, "A British Airways pilot clicked this photo of a solar eclipse when his plane was crossing the Atlantic ocean. One can see another plane on the same flight path."

A British Airways pilot clicked this photo of a solar eclipse when his plane was crossing the Atlantic ocean. One can see another plane on the same flight path.

But a reverse search on the image on Google points two things, one a Pinterest post from 2017, claiming it to be from the solar eclipse of August 21. But the same image has been on Shutterstock by the artist muratart, Now it goes to show that the pictures being shared in the recent times is a digitally enhanced one and not from the recent solar eclipse of June 21. So if you have got their image on your WhatsApp or see it being shared online on other platforms, do let them know that it is not a real photograph, as wonderful as it may look.

The picture is photoshopped of an old image.

(The above story first appeared on LatestLY on Jun 27, 2020 09:40 AM IST. For more news and updates on politics, world, sports, entertainment and lifestyle, log on to our website latestly.com).