Tejas Express From Mumbai To Goa Decorated With Lights On Occasion Of Christmas? Old Video From England Goes Viral With False Claim

Recently, one such news claimed that Tejas Express that plies between Mumbai and Goa, was decorated with colourful light on the occasion of Christmas 2021. A video of the train decorated with lights going viral with a false claim.It is an old video from England. 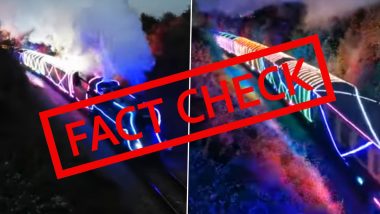 Mumbai, December 29: As social media became popular, several fake news have also started going viral to spread misinformation among the masses. Recently, one such news claimed that Tejas Express that plies between Mumbai and Goa, was decorated with colourful light on the occasion of Christmas 2021. A video of the train decorated with lights going viral with a false claim. The viral video is old. Eggs Growing on Plants in Pakistan? Video of White Brinjal Plantation Goes Viral With Fake Claim; Here's a Fact Check.

Notably, Tejas Express has a diesel engine, but the train in the video has a steam engine. The Tejas Express started in 2017 and is the first high-speed luxury premium train in India. As per a fact check website, Fact Crescendo, a train featured in the video was from England. The viral video was shared with a claim, “Tejas Express for Christmas & new year lighting Mumbai to Goa.” The video was shared on Facebook with a similar claim. Fact Check: Old Fake Video of Gigantic Moon Appearing at The Border of Russia and Canada at North Pole for 30 Seconds Goes Viral Again; Know Truth Here.

Video being Shared WIth False Claims:

The website performed a Google reverse image search on the key-frames. It was found out that the video of the decorated train is from England. The video was first shared by a Facebook user, Scott Williams. The video was taken in Goodrington, Paignton.

Here Is The Original Video:

Williams wrote, “The Train of Lights chuffing through Goodrington, Paignton earlier this evening. It is truly a magical sight watching it pass along the coast all lit up. Hoping to capture a few photos of the train on the countdown to Christmas.” Notably, the train is an annual Christmas Train run by the Dartmouth Steam Railway in southwest England. It runs every year near Christmas. This year the Train of Lights started from November 24 November to December 30, 2021.

LatestLY advises its readers to visit official websites and verify news before sharing them on social media.

(The above story first appeared on LatestLY on Dec 29, 2021 06:26 PM IST. For more news and updates on politics, world, sports, entertainment and lifestyle, log on to our website latestly.com).