From Woke to Cisgender, Here Are Most-Searched Definitions Past Month in US, What Do They Mean?

Lately, there has been an invention of new words - like cisgender or woke - that has left people baffled and with an urge to look them up lest they look like a total ignoramus. From Woke to Cisgender, Here are the most-searched words in the U.S this past month. 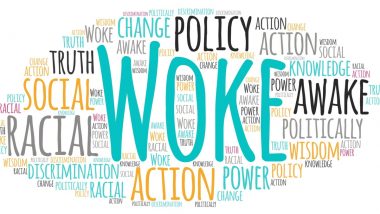 Lately, there has been an invention of new words - like cisgender or woke - that has left people baffled and with an urge to look them up lest they look like a total ignoramus. Most people have embraced the invention and the need for change as the world around us is morphing at a rapid pace. Now, people are more self-aware about their surroundings and want to get in on the change rather than be left behind with the boomers who are still quite set in their old ways. Pansexual, Demisexual, Autosexual or Gynosexual, Were you Aware About These New Sexual Orientations.

You probably don't need a data card to tell you that 2021 has been a year full of change - some good and some in the spectrum of good and others not so much. The pandemic that forced us all to our couches and fuelled some self-rumination and reflection, spurred change in people's perception on many issues, that have plagued the world for decades. The 24-hour news cycle that churned out stories about discrimination and bigotry still prevalent in his world, made many take stock of their privilege and educate themselves about the widespread discrimination in the world. While people who before just dismissed the plight of queer folks either due to lack of understanding or absence of empathy, found themselves googling the definitions of the words as a way to self-correct. Here are the most-searched words in the U.S this past month.

You might have heard this word uttered in a deprecating manner to describe those who don't fit into traditional gender norms. However, recently the word has been reclaimed by the LGBTQ+ community and now used to describe people who fall into the LGBTQIA spectrum of gender norms. These are folks who are sexually attracted to their own gender.

The term Woke has spread like wildfire amid the political and cultural debates around the globe, where people using the word to describe folks who are quite aware of the social issues plaguing the world. Added to the dictionary in 2017, it is described as  “originally: well-informed, up-to-date. Now chiefly: alert to racial or social discrimination and injustice”.

Apartheid was a system that propagated segregationist policies against non-white citizens (Black Citizens) of South Africa. Apartheid translates to apartness in the language of Afrikaans. The oxford dictionary describes it as "a policy or system of segregation or discrimination on grounds of race, segregation on grounds other than race."

Cisgender is a gender identity that was assigned at birth. People who accept these identities are known as Cisgendre folks. Merriam Webster describes the word as "relating to, or being a person whose gender identity corresponds with the sex the person had or was identified as having at birth." Gender Identity Goes Beyond Male and Female: 33 Gender Terms and Their Meanings That You Probably Didn’t Know Of!

An introvert is basically a personality trait where a person does not enjoy being social rather they find joy in their own company. Merriam Webster describes the word as "a person whose personality is characterized by introversion: a typically reserved or quiet person who tends to be introspective and enjoys spending time alone." This has nothing to do with being socially awkward or shy, rather it's a personal preference where they don't find the need to seek out external stimulation. They are quite comfortable focusing on their internal feelings.

(The above story first appeared on LatestLY on Jun 11, 2021 03:15 PM IST. For more news and updates on politics, world, sports, entertainment and lifestyle, log on to our website latestly.com).