Police in Germany has released sketches of a hit and run incident drawn by two 6-year-old children who saw the accident. Four schoolchildren waiting to cross the word with an adult saw the incident of whom 2 drew the pictures. After the children's depiction of the scene, officers are hunting the driver of a black car. 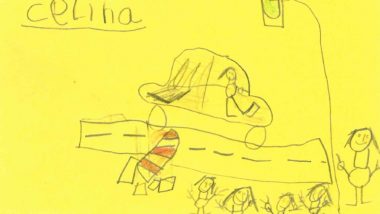 Police in Germany has released sketches of a hit and run incident drawn by two six-year-old children who saw the accident. Four schoolchildren waiting to cross the word, Luisa, Romy, Celina and Luis with an adult witnessed the incident of whom two drew the pictures. After the children's depiction of the scene, officers are hunting the driver of a black car, who is described as a woman with blonde hair. She crashed through a barrier in the city of Hamm last week. Polizei NRW HAM took to Twitter sharing pictures of the sketches by the children.  The incident at Hamm located near Dortmund in the German industrial region of Ruhr. Brave Iowa Police Officers Catch 3 Children Dropped From 3rd Floor of Burning Apartment; Watch Viral Video of the Heroic Rescue.

Police said, "The driver with short blonde hair didn't care about the damage caused and kept driving, and then kept going". However, the children on reaching school informed their teacher who told them to sketch the woman and the accident. Celina shows the four children waiting at a traffic light alongside an adult as the car goes past. The photo shows a barrier lying on the side of the road. The second image drawn by Luis shows a black car with a woman inside can be seen driving past a witness shocked by the incident.

A police spokesman said the accident happened around 8.40 am on November 11 as the children were going to school. As they were waiting to cross the street, a car turned left, hit a barrier and part of it snapped off. The driver drove away and did not stop. When officers later arrived at the school to speak with the children, they showed them the sketches. The officers later said that children 'deserve special praise'.

(The above story first appeared on LatestLY on Nov 16, 2020 07:21 PM IST. For more news and updates on politics, world, sports, entertainment and lifestyle, log on to our website latestly.com).