Giant Burmese Python Scares The Sh*t Out Of This Woman, Thanks to Singapore Zookeepers (Watch Video of Albino Python)

Singapore Zoo recently hosted an animal experience show, where visitors are invited on the stage to understand their behaviours. Bracing her fear, the woman was touching a small snake under the guidance of two zookeepers. And five other zookeepers were standing behind her holding a giant albino python. She naturally freaked out! 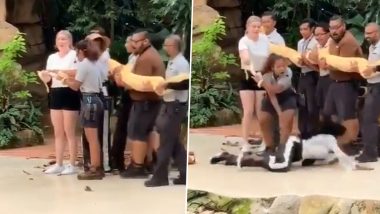 In the scariest of her dream, this woman who decided to attend an ‘animal experience show’, was encountered with a giant snake, something she was not ready for. The unidentified woman had the fright of her life at the Singapore Zoo. While she was trying to be comfortable touching a small snake nervously, with the guidance of two zookeepers, a surprise stood behind her. It was five other zookeepers, who was holding a mammoth Burmese python, lying calmingly on the keepers’ arms. The moment she realised and turned back, it naturally scared the sh*t out of her. The terrifying moment was captured and gradually surfaced online, with the viral video getting enough responses on social media. Snake Hunters Catch 17-Foot Pregnant Female Carrying 73 Eggs From Florida Everglades.

Singapore Zoo recently hosted an animal experience show, where visitors are invited on the stage to understand their behaviours. Having agreed to take part, the woman hesitantly got up and joined two zookeepers on stage to touch a small snake. Standing between the two, who was holding the tail and the reptile’s mouth, she was visibly scared, but trying to face it, in front of the large crowd. The moment she bravely touches the snake’s body, the audience begins to cheer, but not for the reason she thought. Enters five other zookeepers holding a giant albino python. Because of her hat, she could not see the men approaching. The woman finally turned and saw the mammoth reptile lying calmly on the keepers’ arms. Anaconda Snake Crossing Road Brings Traffic to Halt in Brazil.

The woman freaked out and fall on the floor. The audience began to laugh at the chaos unfolded on the stage. She even tried to jump on the pool of water, but was held back by the keepers. Somehow, getting up on her feet, she stood at a corner, disapproving the snake’s sight.

(The above story first appeared on LatestLY on Jul 05, 2019 02:07 PM IST. For more news and updates on politics, world, sports, entertainment and lifestyle, log on to our website latestly.com).