Google Turns 22! Fascinating Facts About the Internet Search Giant to Share on Its 22nd Birthday 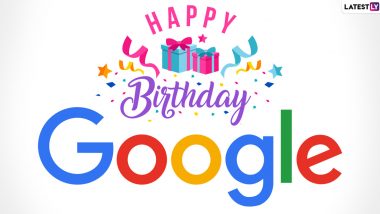 Google has turned 22 years old! The search engine was born on September 27, 1998. Two Stanford PhD students, Sergey Brin and Lawrence (Larry) Page, published a paper about launching a prototype of a "large-scale search engine" on this day. The students had written, "We chose our systems name, Google, because it is a common spelling of googol, or 10100 and fits well with our goal of building very large-scale search engines." Today as Google stands as a multi-dollar company, we bring to you some more interesting facts about the search engine. Funny Memes and Jokes on The Search Engine Giant That Makes Googling Even More Fun.

Since 1998, Google has been publishing doodles. 'Don't be evil' is a phrase used in Google's corporate code of conduct, which is also formerly preceded as a motto. Did you know, if you were to manually search and find the 50 billion web pages that Google hosts till date, it would take 19 years?  Find some more interesting facts about the giant search engine. Happy Birthday Sundar Pichai: Here Are Some Inspiring Quotes From The Google CEO.

When Brin and Page first developed an algorithm for searching the net, they dubbed it “BackRub”. This was then used to measure and rank the importance of webpages based on inbound links.

Spelling 'Google' Was Born Out of an Error

Page and Brin settled on 'Googol' as the name for their search engine, referring to the equivalent to ten raised to the power of a hundred. But while registering they found out that googol was not available but Google.com. Google wasn’t even a real word!

First Google Computer Was Made From Lego

Due to budget constraint, the first Google team custom-made server racks out of Lego bricks.

The doodle was an out-of-the-office message that Page and Brin created in August 1998 to let people know that they were going to the Burning Man festival. They made the iconic Man behind the second “o” in Google’s logo.

Google unveiled Gmail on April 1, 2004, making people think it was a hoax.

Google began at a Starbucks

In 2000, Google unofficially kicked off its New York office at a Starbucks on 86th Street in New York City.

Google Has the Largest Index of Websites in the World

Google has an index with more than 3 billion websites. If you were to print it, you would get 130 miles high stack of paper.

Did you know that 12 no part of a Google office is allowed to be more than 150 feet away from some kind of food? Google wanted to sell itself to online company Excite in 1999 for $1 million, but the Excite CEO rejected the offer. Today, it is worth $300 billion.

(The above story first appeared on LatestLY on Sep 26, 2020 12:01 AM IST. For more news and updates on politics, world, sports, entertainment and lifestyle, log on to our website latestly.com).