How to Eat Pineapple? Viral Video Schools Internet the ‘Correct’ Way to Eat This Tropical Fruit

The short footage shared on TikTok has now surfaced on Twitter is leaving the social media users in awe. 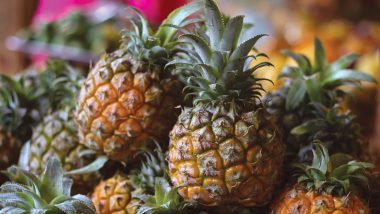 Juicy, sweet, messy and superb for digestion, what is not to love about pineapple? This exotic and tropical fruit is absolutely delicious and packed with nutrients to make the body feel good. But it is difficult to chop up and eat. Or maybe not! A video is going viral which schools that apparently, we have been eating pineapple in the wrong way. Yes, the short footage shared on TikTok has now surfaced on Twitter is leaving the social media users in awe. Garima Arora Is Asia’s Best Female Chef 2019: Everything About the First Indian Woman to Receive Michelin Star.

According to reports, the video was first shared on Tik Tok by user Dillon Roberts that shows someone pulling out sections of the pineapple piece-by-piece after chopping off the top. It is pretty simple! Just pull at the skin towards the centre and the pyramid-shaped pieces would come out which does not need to chop. The clip was later shared on Twitter by Lewis McCluskey, a student from Middlesbrough, England. Avocado Toast-Inspired Sneaker! Saucony's New Shoes Will Suit the Foodie in You.

Im sorry but what the actual fuck 😨 pic.twitter.com/DYaDoGMe7i

The world was indeed not ready for this level of snacking revelation. , not just the easy pineapple eating that impressed netizens, but also the wet chewing sounds in the video that also took some people out.

Check Out The Reactions

One of the Twitterati also explained why the pineapple chunks break off easily. It is because they grow as a bundle of berries, so when you take out a hunk, it is like eating an individual grape.

This is how a baby pineapple looks like. At this point you can clearly see its distinctive berry feature. Compare it with raspberries. They look (in one way or another) similar. The difference is, raspberries do not grow big. pic.twitter.com/KPVodbTlBJ

It was too much for us! We hope this viral education will now save a lot of people grief during their pineapple snacking in the future. Now that you have the hack, enjoy the sweet flavour, on top of merely eating it fresh, raw and on its own.

(The above story first appeared on LatestLY on Mar 08, 2019 04:20 PM IST. For more news and updates on politics, world, sports, entertainment and lifestyle, log on to our website latestly.com).