How to Wear a Bra: Twitter Explodes into a Viral Debate About the Right Way To Wear the Undergarment 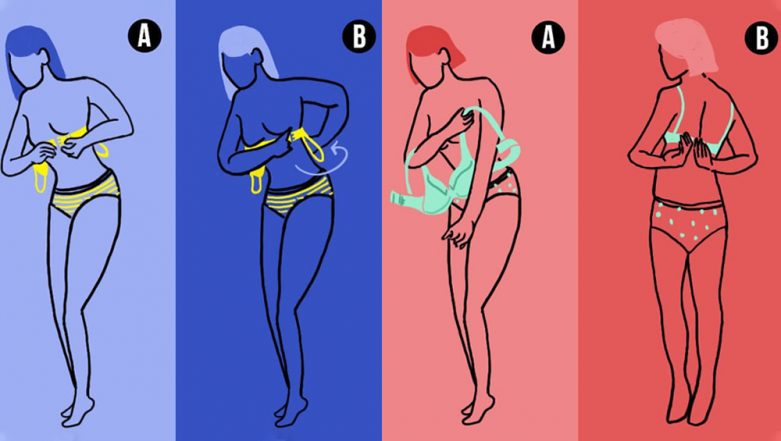 What is the right way to wear your bra? (Photo Credits: Twitter/ aki)

Is there a right way to put on a bra? Or the right way is just based on your convenience? Well, you and I probably don't even care about it but Twitter is a way about the "right" way to wear a bra. The whole Twitter fiasco began after one user tweeted out asking people how they wore their bras. She wrote: "hey y’all how do you put on a bra?? with the clasp in front of you and then turn it around, or putting the bra on regularly and clasping it from the back ??? I GOTTA KNOW." She also provided with a handy graphic for people to understand how people wore their bras. The graphics showed two different approaches to that.

Soon after the tweet, people began to lose their minds about what actually was the right way to wear the bra? Mixed reaction tweets were served to the question as the social media platform seemed confused.

Take a look at the reactions from Twitter users:

hey y’all how do you put on a bra?? with the clasp in front of you and then turn it around, or putting the bra on regularly and clasping it from the back ??? I GOTTA KNOW pic.twitter.com/w0wLSZvuXe

...and from the other side came this:

How else would you do it? You can't see what you're doing if you're working behind your back.

Dislocating my shoulders to put on a damn bra? No thanks.

I do my 5 clasps in the back, I dont know why it would be better in the front, I still wouldn't be able to see anything under my boobs!

I am team back clasp and it's always come simply and naturally. I have medium boobs. I'm also very flexible and never considered doing this any other way. I'm sharing for the data collection aspects. I think we are all learning here.

and then came this... can't stop laughing

The debate is still on and has left me wondering am I wearing my bra wrong all this while? Well, looks like there is no one way. I am team back clasp too, what about you?