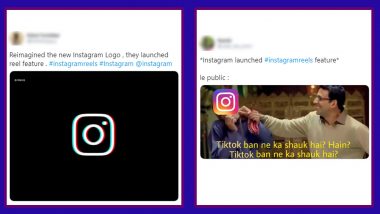 Popular social media and photo-sharing application Instagram unveiled a new feature last night for the Indian users, called Reels. In this feature, a user can make short 15-second videos by adding their own music or lipsyncing to the music from the library. It is very similar to TikTok, an app that as recently banned in India following the Indo-China border issue at Ladakh. The new feature is of definite benefit for TikTok creators who can now switch to Instagram to post their videos. The new feature, however, hasn't gone down well with many netizens who preferred the old picture sharing and stories format on the app. People are reacting with memes and jokes comparing reels to TikTok. Instagram Reels Funny Memes and Jokes Trend Online After Photo-Sharing App Introduces TikTok-Like Video Making Feature in India.

Instagram Reels went live at 7.30 PM yesterday for Indian users. Needless to say, people were quick to try it too. So if you have scrolled through Instagram since morning, you may have seen people posting their Reels on feed. You can also see it in the explore section of the app. The video format, making interface everything is similar to TikTok. A piece of good news for the TikTok creators but those who were not too fond of the platform are not liking the new update. Funny memes and jokes on a comparison between Reels and TikTok are trending online. #TikTokBaninIndia Funny Memes and Jokes Trend on Twitter As Netizens Laud Govt's Move to Ban The Chinese App Among 59 Others.

The Stories of Logo Change

You see what you see pic.twitter.com/umzA8miuy4

who called it Insta Reels and not Insta Steals

(The above story first appeared on LatestLY on Jul 09, 2020 01:55 PM IST. For more news and updates on politics, world, sports, entertainment and lifestyle, log on to our website latestly.com).