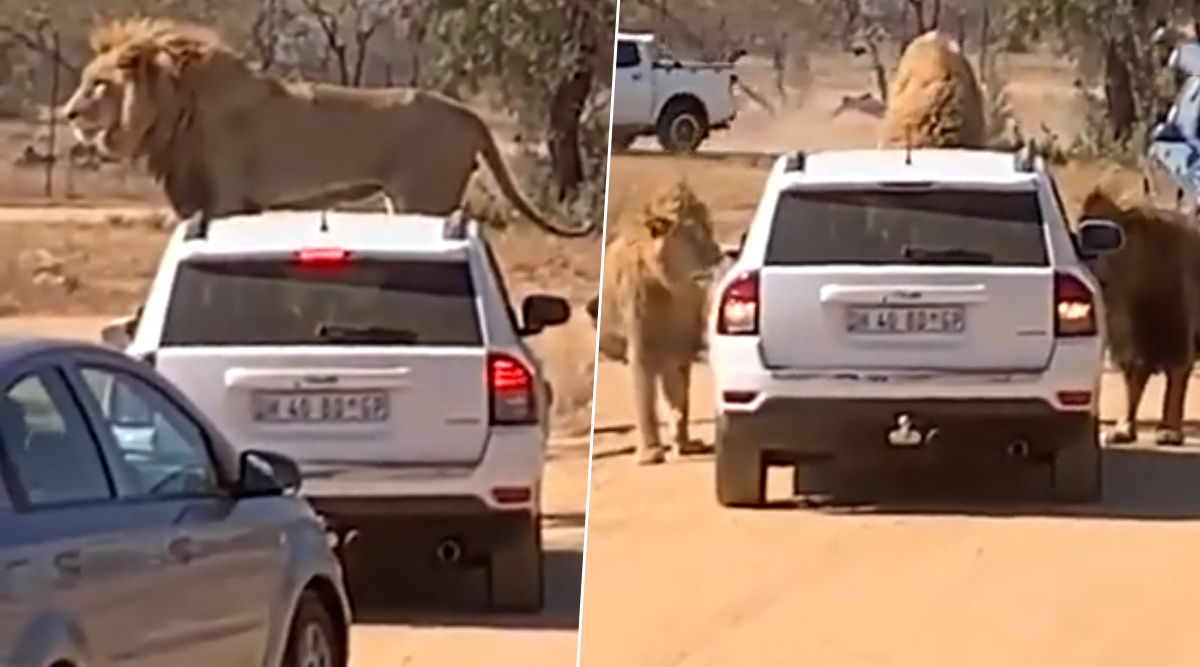 A video going viral on social media shows a lion sitting on a car while two others blocking the vehicles from both sides. The lions had blocked the cars which were on a jungle safari. The clip shows how the animal trying to open the door of the white jeep. After multiple failed attempts it then jumps on the bonnet of the car. And soon the wild cat is joined by two other wild cats.

Tourists present at the site could be heard saying, "There is a lion on top of the jeep." Eventually, the driver takes reverse and the lions jump to the nearby grassland. As the wild animals continue to block their way, the cars return with no other way left. While this is an old video, it has started doing rounds on the internet all over again after it was posted on Reddit. Grass-Eating Lion from Gujrat’s Gir Forests is Going Viral, Netizens Are Freaked Out!

The video has received more than 12,700 upvotes and over 300 comments. As the clip was widely shared a user recalled how they went through a similar experience at the Woburn Safari Park in the United Kingdom. During which a lioness had torn the tyre of their vehicle. Man vs Wild: Lion Chases Tourists During Safari Ride at Atal Bihari Vajpayee Zoological Park in Karnataka, Video Goes Viral.

A Reddit user commented on the video saying, "There are risks associated if you decide to drive your car inside, such as damage to your car, but it is completely safe. There is always a work truck in each section in case the animals start acting up, but they are all used to the cars going slowly along the roads. There is the option to take a narrated bus trip instead of driving your own car in."