Parrots in UK Safari Park Removed For Swearing and Laughing at Visitors, 3 Other Times When Talkative and Abusive Parrots Have Amused the Internet (Watch Videos)

The parrots would shout abuses and profanities at the visitors. With people laughing at their antics, they only got encouraged more. But these swearing birds have now been moved. This is also not the first time, a parrot's swearing have caused some problems. We gather similar videos of parrots who can swear too well. 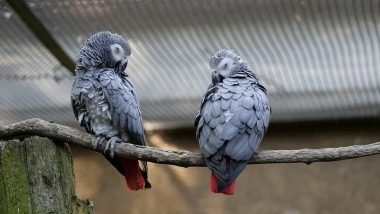 Parrots are known to be talkative birds, especially the ones as pets. These birds have the ability to pick up on words spoken by their owners and some can be really trained well to speak. But this very ability of them has proved a reason of embarrassment at a wildlife safari park in the UK. Lincolnshire Wildlife Park had accepted a new flock on birds just last month, but now has been forced to remove them from public display and keep them in isolation. The parrots would shout abuses and profanities at the visitors. With people laughing at their antics, they only got encouraged more. But these swearing birds have now been moved. This is also not the first time, a parrot's swearing have caused some problems. We gather similar videos of parrots who can swear too well. Real-Life Daenerys Targaryen? Little Girl Trains Her Parrot to Attack Whoever She Screams On; Watch Viral Video.

Apparently, these birds taught each other to swear and then repeated it in front of the guests at the park. The park chief described their swearing and laughing antics like "an old working men's club scenario". Within 20 minutes of being on display their were complaints of their funny antics. The staff decided to shift them in a separate section as there would be kids visiting over the weekend! We can imagine how funny it would be. Parrot Befriends Amazon Alexa, Plays Songs and Shops Online While Owner is Away.

Jessie the parrot in now home safe & sound with her owner and she had this to say to the firefighters who came to help her in #Edmonton https://t.co/Th2nlVCq7I pic.twitter.com/3ABkzH2nHY

A parrot named Jessie was stuck on a roof in London and firefighters were called in for rescue. As per witnesses, when a rescuer actually reached the parrot, she was not even slightly kind but swore at the firefighter instead. She said the 'F-word' at the crew manager. In another video, she did thank them later on.

This parrot named Lucky Angel from Ireland went viral on the internet for its political take. The African Grey Parrot was recorded using foul language for Trump and apparently even hates on Brexit. In the above video he is heard saying, "Trump's a w*****r"!

Ruby, another African Grey Parrot is quiet famous on the internet for hurling abuses. There are multiple videos of Ruby who can knows most X-rated words. There's an entire channel called X Rated Ruby which has all the videos of this parrot hurling profanities.

So yes, parrots can be too talkative, and these videos show how they pick up on some of the abuses too fluently.

(The above story first appeared on LatestLY on Sep 29, 2020 09:13 PM IST. For more news and updates on politics, world, sports, entertainment and lifestyle, log on to our website latestly.com).