The dangerous scene was captured on a CCTV camera set out in the forest to keep a watch. The forest department released the footage on social media last week and since then the video is going viral. 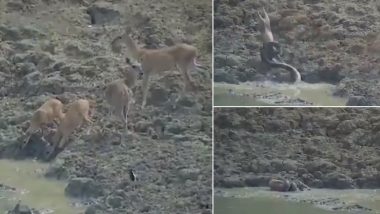 A terrifying snake fight has been caught on camera in Maharashtra's Chandrapur forest. A python was caught leaping out of a pond to attack a deer. A herd of deer was drinking water from the water resource, when the snake took its chance and attacked the deer. Although pythons are non-venomous, they kill their prey by constricting them. The dangerous scene was captured on a CCTV camera set out in the forest to keep a watch. The forest department released the footage on social media last week and since then the video is going viral. Python Eats a Crocodile! Photographer Captures Incredible Pictures of the Attack in Queensland, Australia (View Pics).

A herd of deer drinking water from the pond was clearly unaware of the danger that awaited them. A python struck at its prey by jumping out. The deers did move when they figured out something moved but for one of the deers, it was too late. The python struck and then coiled around the deer to strangulate it. The deer got pulled into the swamp and the fight for survival continued in the water. However, the python had got control over the deer and reports say, it swallowed the deer soon enough. The footage was released by Central Chanda Forest Department. Python Measuring 13-feet Hid in China Spa Ceiling For 10 Years, Found After Falling Through Plasterboard.

Watch The Footage of Python Jumping Out to Attack The Deer:

Off late, there have been a lot of reports about pythons attacking or pythons getting attacked. Last week, a thrilling fight between a leopard and a python was captured by a photographer. The incident was from Masai Mara national park, when a python tried attacking a leopard but the leopard managed to overpower its predator. The python was smashed by the leopard after an ensuing fight.

(The above story first appeared on LatestLY on Nov 25, 2019 04:15 PM IST. For more news and updates on politics, world, sports, entertainment and lifestyle, log on to our website latestly.com).