Shoplifter Seagulls! Video of The Seabird Stealing a Packet of Chips Go Viral, 5 Times When Seagulls Thought It Was CUTE To Slyly Fly Away With Eatables From Shops 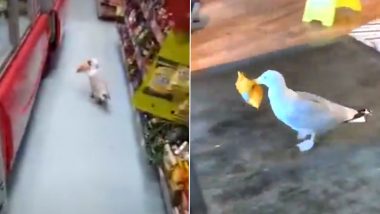 Seagulls may be known swooping fish out of the water, but they are good at other things too! If you didn't know, they are very shoplifters, yes that's right. We have found multiple videos that prove our claim. They enter shop quietly as if everything is normal and then quickly pick up a packet of chips and run as if there is no tomorrow. Don't believe us? Then these videos would do the needful. There are a dozen videos showing seagulls are different places stealing crips, bread and anything edible to them. The latest one is quite funny and we can't stop laughing at it. It shows a seagull entering a shop, taking out a packet of something and running away. Monkey Steals Cake of Man Celebrating His Birthday in The Jungle, Watch Funny Video.

The video is funny because of the seagull's body language which proves it has a thief for quite some time now. It goes inside tiptoeing just like robbers and after picking up the packet, the bird runs for its life. The video was shared on Twitter with the caption, "Note the casual entry and hurried exit, this is an experienced seagull shoplifter." Soon, people shared similar videos in the comments section causing a laughter riot. Thirsty Macaw Parrot Drinking Coconut Water by Piercing Through it With Claws Goes Viral, Video Amuses Netizens.

this is an experienced seagull shoplifter pic.twitter.com/WnIOkIsqfK

As this video began to go viral, people started sharing more such videos of seagulls where they can be seen stealing. People laughed at the seagull and praised its ability. However, one Twitter user wrote, "An experienced shoplifter wouldn’t have made such a panicky departure. That bird needs some more lessons and it was caught on camera."

On days they don't find fish, they go to shops and take a packet of chips, did we say they don't pay, because obviously they are birds.

The exact same thing happened here in Dublin! This seagull took a bit longer to build up the courage though 😂 pic.twitter.com/61EGhnbI01

Seems this seagull is new to stealing and did not dare to take the chips at the first go. After mustering quite some courage, it finally managed to take a packet.

Take it out and run away before the storekeeper sees. We wonder how these birds developed the taste for chips and who taught them to steal.

We think seagulls pass on these traits also to their younger ones, how else do all of them are quite good at it?

5. Seagull Caught in the Act:

Well, after those successful attempts, here comes a bird who didn't quite win the bargain. It tried the best but didn't manage to roll out the packet of bed from the store. We wonder if it succeeded later or not.

Seagulls are quite intelligent and often can imitate stamping and even trick worms to come to the surface of the ground. They are also very caring parents by having some complex communication patterns.

(The above story first appeared on LatestLY on Aug 09, 2020 05:58 PM IST. For more news and updates on politics, world, sports, entertainment and lifestyle, log on to our website latestly.com).