Tiger, the Cat, Steals the Thunder From UK’s Dean of Canterbury by ‘Paw-Dipping’ in Jug of Milk During Virtual Prayer Service, Hilarious Video Goes Viral 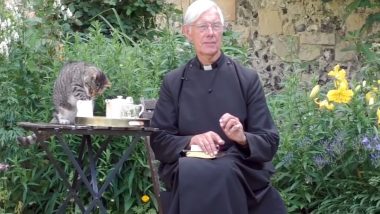 Cats are so adorable. Aside from their often ‘cat-titude,’ they are endearing to have around. There are many videos showing the cutesy sight of the felines as owners capture it and share on social media. A video is now doing rounds on the internet that shows a cheeky cathedral cat ‘paw-dipping,’ on the Minister’s jug of milk, while he was live-streaming morning prayers. The cat identified as Tiger was captured hopping up onto a table before lapping up the jug of milk as the Dean of Canterbury in the UK, Dr Robert Willis was telling viewers about the gospel of St Mark. The furry visitor was quick to steal the thunder from the vicar, and the hilarious video has gone viral on social media. Funny Videos of Dogs And Cats Giving a Tough Time to Their Hoomans Working From Home During Lockdown.

Like many services, morning prayers are also being held online these days in a bid to curb the further spread of coronavirus. The cases of coronavirus are rising every day, and this is why services, as much as possible have gone virtual, in a bid to give viewers live experience while still abiding by the stringent precautionary measures. Cat Knocks on Owner's Door in Britain and Patiently Waits Outside to Let in.

According to reports, Canterbury Cathedral has been running virtual prayer services live for worshippers since the United Kingdom was put into lockdown on March 23, 2020. The video begins with the vicar, leading the prayer service, when the feline was seen creeping behind him. Tiger then leapt up onto the next to Dr Willis before jumping onto the table where a teapot and a small jug of milk was placed. The cat proceeded and dipped his paw onto the jug of milk and lick it. The feline was busy in his movement, trying to drink the milk, as his face was too large to drink it directly from the jug.

Dr Willis tried to ignore Tiger initially, but interrupted his service and apologised viewers. “Sorry, we have acquired a friend this morning,” he can be heard saying. The adorable video has gone viral on social media.

Isn’t it adorable? According to reports, Tiger is one of the four cats at the Deanery. Canterbury reopened for worshippers on July 4, 2020, followed by months of lockdown. Worshippers will need to follow one-way routs and use socially distanced seating and hand sanitizer stations.

(The above story first appeared on LatestLY on Jul 09, 2020 03:49 PM IST. For more news and updates on politics, world, sports, entertainment and lifestyle, log on to our website latestly.com).