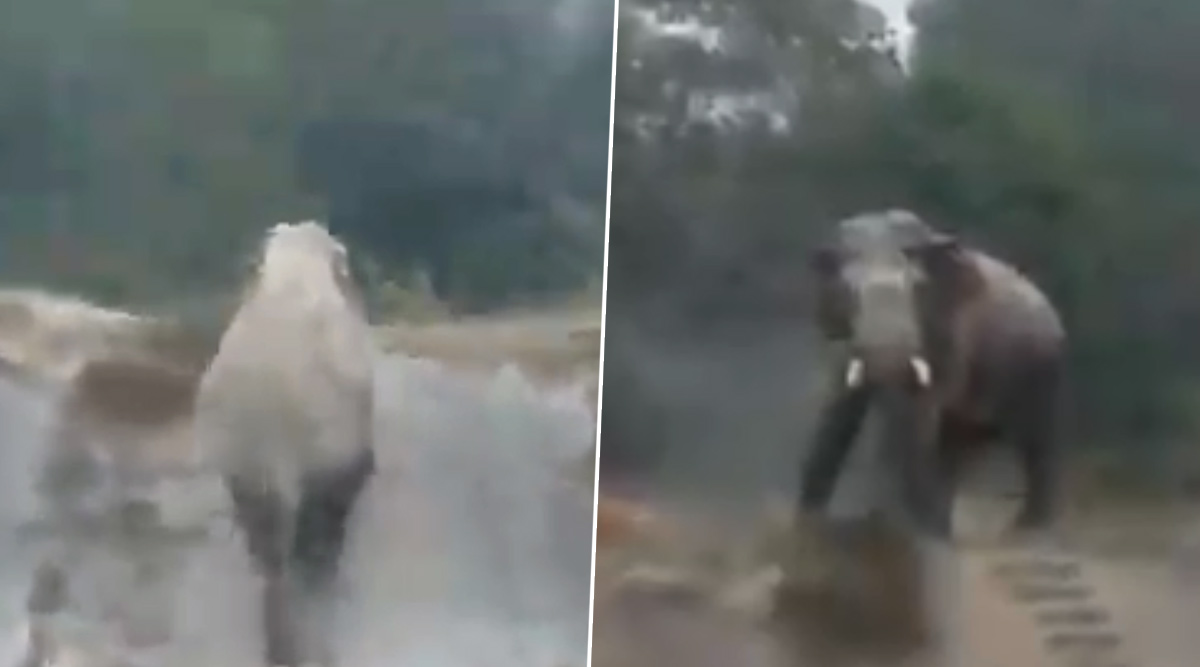 Elephants are the cutest, and not just that, they are also one of the most intelligent animals, there eixst. While they have given us enough evidence of their intelligence, this yet another viral video of an elephant just restored our faith. A recent video shared by Indian Forest Officer Parveen Kaswan shows how this giant animal is capable of meticulously climbing narrow stairs. Kaswan shared the video with a caption that read: "This #elephant using a staircase. What other option he has. The last look will tell you many things!" Elephant With Traffic Sense! Video of Jumbo Waiting For Vehicles to Pass on Busy Road Amuses Netizens.

He also went on to describe: "You see how good he has used those narrow stairs to climb the elevation. Elephants use resources in the best manner. They learn fast, like how to deal with power fencing, blockades, such infra etc. Just to survive." In the video, you can see a huge elephant slowly but steadily climbing a flight of narrow stairs to reach an elevated road and it is the best thing you will see today. It is not just about climbing stairs but the way the animal did it. The elephant very carefully takes its steps to reach on the top and then also looks back maybe to see what a great job he has done. Take a look at the viral video for yourself. Elephant Climbs Tree to Pluck Jackfruit, Smashes and Gobbles It Up, Watch Video.

This #elephant using a staircase.

What other option he has. The last look will tell you many things !! pic.twitter.com/MC1Q8UwNGr

It is commendable to see the precision used by the elephant to climb the stairs. The video left netizens surprised and one of the users even wrote: "I was so afraid he might slip and fall but then he trumpeted his victory over manmade obstacles which should have been repaired knowing it's a right of way for wildlife too! But does anyone care if some animal fell?" Well, this is not the first time, just a few months back an elephant at a national park in Zambia left social media users laughing at it was seen stealing mangoes. The elephant took a leap over the five-foot wall to get the fruit and the video of the cute crime had gone viral.