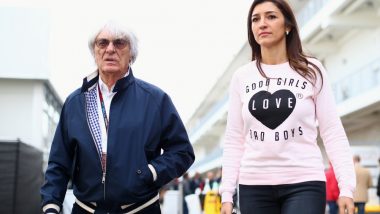 Fabiana said, "It was all so easy. The birth was over after 25 minutes. I thank god.” This is Bernie's third wife and he shares Deborah with ex-wife Ivy Bamford and Tamara and Petra with ex-wife Slavica Ecclestone. The former F1 boss married the marketing director Flosi way back in 2012. This happened after he divorced the Croatian beauty Radic.  Bernie and Flosi met each other at the World Motor Sport Council in 2009.

Bernie Ecclestone was in the news for taking a jibe at Lewis Hamilton when he had raised the BlackLiesMatterMovement and the former F1 boss went on to say that black people are more racist than the whites. He also had expressed his surprise after Hamilton had been upset about taunted by fans in blackface. Later during an interview with a newspaper Bernie defended himself and had said that he is not anti-black but is quite the opposite.

(The above story first appeared on LatestLY on Jul 02, 2020 09:03 AM IST. For more news and updates on politics, world, sports, entertainment and lifestyle, log on to our website latestly.com).