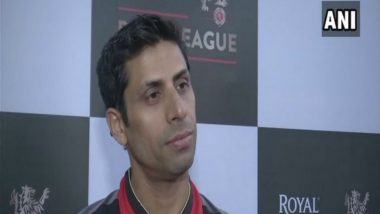 New Delhi, Aug 2: Former India fast-bowler Ashish Nehra is of the opinion that organising the Indian Premier League (IPL) in the UAE won't be an easy task amid the ongoing coronavirus crisis.

The 13th edition of the cash-rich league was shifted to UAE in the wake of rising COVID-19 cases in India and it is currently scheduled to be played from September 19. Virat Kohli, RCB Captain, Flaunts His New Cricket Gear Ahead of IPL 2020 (View Pic).

Citing example of England fast-bowler Jofra Archer, who was banned from the second #raisethebat Test against West Indies for breaking the bio-secure bubble in Southampton last month, Nehra said the onus will be on the players to make the job of officials easy.

"We have seen one incident of Jofra Archer, so we are hoping that those kinds of the incidents don't happen. That was a bilateral series where the teams are staying at the ground. Either you talk about Southampton or Old Trafford, there are hotels at the ground," Nehra said during Star Sports' show Cricket Connected.

"But in the IPL that's not the case, so all the players should support BCCI...should support IPL in organising things better. It's not going to be easy...it's going to be a hell of a job just to organise the tournament because you're talking about eight teams.

"Yes, the good thing is that one won't be required to take flights and everything will be by road, so everything will be close. So I am sure it will be a great tournament again, but we should be careful and play our part for sure," he added.

Earlier, Delhi Capitals' batsman Ajinkya Rahane also urged everyone to follow the COVID-19 protocols sincerely during the IPL. He also stated that players will take just few days to get used to the rules put in place for the safety of everyone involved with the tournament.

"Talking about the bubble, it's important, we follow all the protocols. We were actually not sure when we were in New Zealand in Feb-March as to what is going to happen next," Rahane said during India Today's show Inspiration.

"But now in August and September, we are in a situation where we should be realistic and be disciplined. I don't think it will take too much time to adjust. It's just a matter of 2-3 days being with the team to get used to the rules."

(The above story first appeared on LatestLY on Aug 02, 2020 03:36 PM IST. For more news and updates on politics, world, sports, entertainment and lifestyle, log on to our website latestly.com).