Both sides are coming off victories in their first matches and it would be an interesting clash. Australia would have a slight edge over Sri Lanka given the fact that they have experience in their ranks but Dasun Shanaka's side cannot be taken lightly, especially after a strong show against Bangladesh. 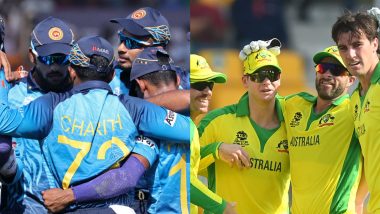 Australia would be hoping to build on their momentum from their win over South Africa when they face an exciting Sri Lankan side in The T20 World Cup 2021 on Thursday, October 28. The Aussies were clinical in their victory over the Proteas and although there was an instance of wobbly batting, it is most likely to not get repeated when they clash with Sri Lanka. The latter on the hand, have looked very confident with the bat, chasing down a 170+score against Bangladesh in style. This clash is going to be an interesting one but it might just be slightly tilted in favour of Australia, who have more experience in their ranks. AUS vs SL, ICC T20 World Cup 2021 Super 12 Dream11 Team Selection: Recommended Players As Captain and Vice-Captain, Probable Line-up To Pick Your Fantasy XI

Sri Lanka might lack experience of playing in such a competition but the abundance of talent in their team makes up for that. Led by a young energetic skipper in Dasun Shanaka, the Lankan Lions are unbeaten so far, starting from the first round matches and now, they would face a stern test when they take on Australia. Let us take a look at the Head-to-Head records and other things for this Group 1 match.  ICC T20 World Cup 2021 Points Table, Super 12

When it comes to Head-to-Head records, there's really nothing much to separate Australia and Sri Lanka, who have eight games each in the total of 16 matches played. In T2OI World Cups, Australia have a slight edge with two wins in three matches. Sri Lanka have defeated Australia only once in a T20 World Cup match.

Josh Hazlewood and Glenn Maxwell would be the most important players for Australia whereas Charith Asalanka and Wanindu Hasaranga would be the key performers for Sri Lanka in this Group 1 match.

The battle between Josh Hazlewood and Charith Asalanka would be a very interesting one to watch as both of them are in very good form. Also the duel between Glenn Maxwell and Wanindu Hasaranga can turn out to be a riveting one. Maxwell has been playing very well of late and Hasaranga too could extract some help from the spin-friendly Dubai pitch.

The AUS vs SL clash will be played at the Dubai International Stadium on October 28, 2021 (Thursday). The AUS vs SL encounter has a start time of 07:30 pm IST (Indian Standard Time) with toss taking place at 07:00 pm.

Fans can live telecast the Australia vs Sri Lanka match live on Star Sports channels. The AUS vs SL match in T20 World Cup 2121 live telecast will be available on Star Sports channels in English and well as regional commentary languages. Fans looking for how to watch the AUS vs SL live streaming online can watch the match live on the Disney+Hotstar app as well as on the website. Fans watching the live streaming online on Disney+ Hotstar will have to pay a nominal fee and subscribe to catch the live-action.

(The above story first appeared on LatestLY on Oct 27, 2021 05:45 PM IST. For more news and updates on politics, world, sports, entertainment and lifestyle, log on to our website latestly.com).