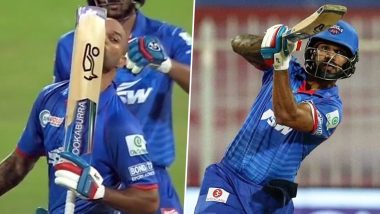 Shikhar Dhawan brought up his maiden Indian Premier League century as Delhi Capitals defeated Chennai Super Kings by five wickets, advancing back to the Dream11 IPL 2020 points table. Chasing 180 in Sharjah, DC lost Prithvi Shaw in the second ball and were on the back foot. However, Dhawan took the mantle of run-scoring upon himself and scored runs all over the park. Although Shreyas Iyer and Marcus Stoinis made some significant contributions, the show belonged to the left-handed batsman. Needing 17 runs off the last over, Axar Patel smashed three sixes off Ravindra Jadeja as DC crossed the line with one ball to spare. DC vs CSK Highlights Dream11 IPL 2020.

Earlier in the day, CSK skipper MS Dhoni won the toss and elected to bat at the Sharjah Cricket Stadium. The decision proved to be a disastrous one as CSK lost Sam Curran without a run on the board. However, Shane Watson (36) joined forces with Faf du Plessis (58) and pulled things back for the Yellow army. The latter brought up his fifty, but the scoring rate was always moderate. Nevertheless, Ambati Rayudu (45) and Ravindra Jadeja (33) rained fours and sixes in the death overs, powering CSK to 179/4 which eventually didn’t prove to be enough. Meanwhile, let’s look at the stat highlights of the game. Shikhar Dhawan, Axar Patel Hailed by Netizens After The Duo Leads Delhi Capitals to 5-Wicket Win Over Chennai Super Kings.

# Delhi Capitals went back to the pinnacle of the points table with this win.

# Faf du Plessis scored his fourth fifty of the season.

# Shikhar Dhawan crossed the 50-run mark for the third straight time this season.

# Dhawan took the most matches (168) to score his first IPL hundred.

Delhi now have seven victories from nine outings, and they are just a step away from booking a berth in the playoffs. They’ll like to attain the confirmed status against Kings XI Punjab at the Dubai International Cricket Stadium on October 20. On the other hand, CSK need to win almost all their remaining five games to make it to the final four. Their next assignment is against Rajasthan Royals at the Sheikh Zayed Stadium in Abu Dhabi on October 19.

(The above story first appeared on LatestLY on Oct 18, 2020 12:40 AM IST. For more news and updates on politics, world, sports, entertainment and lifestyle, log on to our website latestly.com).