An exciting clash is expected when these two sides take on each other in Abu Dhabi today. Delhi would hold a slight edge over their opponents as they looked a much more composed outfit with balance in all three departments. Rajasthan meanwhile would expect a spirited performance like their last match to topple second-placed Delhi. 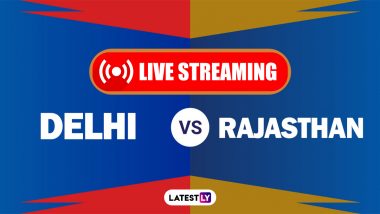 A confident Delhi Capitals unit would face off against a spirited Rajasthan Royals in the Indian Premier League on Saturday, September 25 at 3:30 PM IST (Indian Standard Time). The match would be played at the Sheikh Zayed Cricket Stadium in Abu Dhabi.  This surely promises to be a cracker of a game since both these teams would be upbeat after having won their previous matches, albeit in contrasting manners. Kartik Tyagi's last-over heroics for Rajasthan Royals against Punjab Kings would always go down as one of the most remarkable feats in T20 cricket. Defending just four runs off the last over, the 20-year old demonstrated a cool head and eventually fetched a thrilling and a very much unlikely win by two runs. A victory from a losing position would give Rajasthan Royals some much-needed confidence, especially in a situation like this, where all the matches are significant with respect to qualifying for the playoffs, DC vs RR Preview: Likely Playing XIs, Key Battles, Head to Head and Other Things You Need To Know About VIVO IPL 2021 Match 36

Delhi Capitals would however, be the better settled side, heading into this clash. They have done remarkably well under Rishabh Pant's captaincy so far and with 14 points from nine games, they need just one more win to secure a spot in the playoffs. Anrich Nortje, who breathed fire with the ball last match, would once again be a key player against Rajasthan Royals' star-studded batting lineup, which has players like Sanju Samson, Evin Lewis and Liam Livingstone in their ranks. For Delhi, Shikhar Dhawan, who is currently leading the Orange Cap, has been one of the reasons for Delhi's success this season and he is once again expected to lead from the bat with the bat. DC vs RR, Abu Dhabi Weather, Rain Forecast and Pitch Report: Here’s How Weather Will Behave for Delhi Capitals vs Rajasthan Royals IPL 2021 Clash at Sheikh Zayed Cricket Stadium

Those unable to watch the DC vs RR match live on television can follow the game online. Disney+Hotstar will be live streaming the Delhi Capitals vs Rajasthan Royals match online for its fans in India. Fans, however, need to subscribe to Hotstar by paying a nominal subscription fee. JIO are also providing Hotstar subscriptions on select plans.

(The above story first appeared on LatestLY on Sep 25, 2021 08:34 AM IST. For more news and updates on politics, world, sports, entertainment and lifestyle, log on to our website latestly.com).