Chris Woakes has already returned home after the third Test without playing a single match in the tour. He returned without playing a game in England’s tour of South Africa, Sri Lanka and now India. Dominic Bess, however, could come back into the side after sitting out of the previous two Test matches. 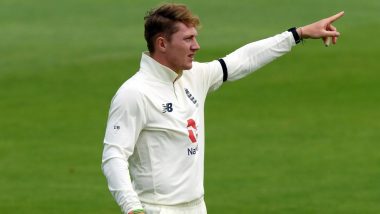 After succumbing to their lowest ever Test score against India in the previous match and subsequently losing the Test by 10 wickets, England will eye revenge when they take the field for the final Test of the four-match series. India vs England fourth Test will begin on March 04 (Thursday) at the Narendra Modi Stadium. Joe Root’s men find themselves 2-1 behind in the Test series with a chance of reaching the ICC World Test Championship already gone. So is their chance of scripting a famous Test series win in India. But a victory in the final Test will help them avoid a series of defeat. And that at this is stage is all they can fight for. India Likely Playing XI for 4th Test vs England: Probable Indian Cricket Team Line-Up for Last Match in Ahmedabad.

Chris Woakes has already returned home after the third Test without playing a single match in the tour. He returned without playing a game in England’s tour of South Africa, Sri Lanka and now India. Dominic Bess, however, could come back into the side after sitting out from the previous two Test matches. Bess, who played in England’s 227-run win in the first Test, was dropped in-favour of Moeen Ali in the second Test and was then not picked for the third match with England going with only one recognised spinner in the playing XI. Ahead of the IND vs ENG fourth Test, take a look at the England likely playing XI. IND vs ENG Dream11 Team Prediction: Tips To Pick Best Fantasy Playing XI for India vs England 4th Test 2021.

Openers: England are expected to retain the same pair that opened for them in the pink-ball Test. Zak Crawley showed his potential in the first innings with a class half-century even as those around him struggled. His 53 off 84 balls was almost fifty percent of England's runs in the first innings. Crawley was out for a first-ball duck in the second but should keep his place in the playing XI. Dom Sibley is also likely to retain his place with the other opener Rory Burns horribly short on confidence.

Middle-Order: England have a more settled and solid middle-order compared to their opening pair. However, Jonny Bairstow and Ollie Pope will have to step up if the visitors are to walk away with a result. Captain and vice-captain Joe Root and Ben Stokes were stars of the win in the first Test and will want to replicate that performance. But they need support from the other two batsmen on either side. Bairstow bagged a pair in the last Test while Pope has struggled against Ravichandran Ashwin.

Wicket-keeper: Ben Foakes has been brilliant behind the stumps and has shown enough tenacity with the bat but needs to score runs. In the two Tests that he has played, Foakes has once again shown he is England’s best wicket-keeper, but the batsman in him is what England need more now.

All-Rounder: Stokes, who is also one of England’s best batsman, will be the lone all-rounder in the playing XI. He has under bowled in this series, but that’s understandable given the conditions and pitch. Stokes, however, can produce a moment of magic irrespective of conditions and will want his captain to hand him the ball more.

Bowlers: James Anderson, Jack Leach and Jofra Archer could keep their place in the playing XI while Stuart Broad drop out for Dominic Bess. Broad is one of England’s all-time great but has struggled against India. His record in India is worse, with a strike-rate of 114.6. Broad played the last two Tests and bowled 26 overs without picking any wicket. Bess achieved his career-best figures in the first Test picking 4-76 in the first innings.

But his wayward bowling in the second innings – where he gave away 50 runs in eight overs for only one wicket  - resulted in him getting dropped for the second Test in favour of Moeen Ali. But with Ali now back in England, Bess could be the only change England makes.

(The above story first appeared on LatestLY on Mar 01, 2021 03:28 PM IST. For more news and updates on politics, world, sports, entertainment and lifestyle, log on to our website latestly.com).