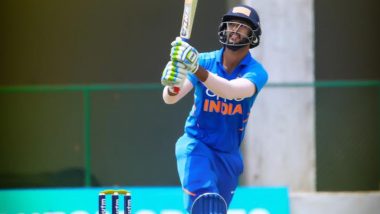 Shivam Dube has been one of the most emerging cricketers of this generation. He created ripples with his ability to contribute with the bat and the ball. Not only in the domestic circuit but also in the International matches, Shivam has proved to be one of the most efficient batsmen and thus, is a remembered name. Now on his birthday, the official account of the BCCI and the netizens wished him as he turns a year older. Also, the official account of Mumbai T20 league sent him good wishes. Even his IPL franchise Royal Challengers Bangalore joined the bandwagon to wish the cricketer. Shivam Dube Sets Twitter Blazing With Fiery Knock to Lead India A to Four-Wicket Victory over South Africa A.

Shivam Dube in the Mumbai Premier League played for Shivam Dubey had taken on Praveen Tambe and slammed five sixes in the over. He also went on to barge three consecutive sixes against West Indies and thereby became a household name. Thus as the Mumbai cricketer turns a year older, the official account of the BCCI took to social media and shared a tweet. The fans also posted their wishes for Dube. Check out a few tweets below:

Have a great day Champ!

Drop a 🥳 to wish Shivam on his special day! #PlayBold pic.twitter.com/bHfvO7snV7

Happy Birthday Dube bro . Lots of expectations from you for both India and RCB . Have a nice year ahead

Talking about Shivam Dube, after a series of prolific performances, he was bought by the Royal Challengers Bangalore for the worth of five crores. The fans are also eager to see him in action in the Indian and RCB colours. On his birthday the entire team of LatestLY, wishes him a Very Happy Birthday!

(The above story first appeared on LatestLY on Jun 26, 2020 03:21 PM IST. For more news and updates on politics, world, sports, entertainment and lifestyle, log on to our website latestly.com).