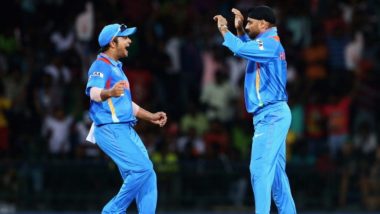 Sachin Tendulkar has truly has been an aspirational figure to all the budding cricketers. Many young cricketers pick up their bats and aspire to be like the Master Blaster. Things were no different with Suresh Raina who narrated a story of how he bunked his school to watch Sachin Tendulkar’s famous desert storm match which was held in Sharjah in 1994. Bhajji who read the piece on news took to social media and questioned the left-hander saying that the match was held at 4.00 pm IST so how did he bunk the school. Harbhajan Singh Slams Indian Team Management on Picking Krunal Pandya Over Yuzvendra Chahal in the 1st T20I Against Australia.

As per the interview given to the Times of India, Raina along with his friend had skipped the last two classes along with his friend Amit. The 12-year-old Suresh Raina also binged on a few kebabs which were sponsored by Jamil bhai. “We had TV at home, an Uptron, but with only Doordarshan on it,” recalled Raina in a chat with Timesofindia.com. Now Bhajji who read the piece of news questioned Raina on social media on how did he bunk the school. Check out Bhajji’s tweet below:

School bunk 🙄😄 how ? That game started at 4 pm indian time 😜I was part of the series https://t.co/JWnZqa2Zl8

Talking about the desert storm match, was not only important for the storm which obstructed the game for about 45 minutes but also for Sachin Tendulkar's innings. India was playing against Australia and the Master Blaster had scored 143 from 131 balls. During the course of his innings, he scored nine fours and five sixes.

(The above story first appeared on LatestLY on Jun 01, 2020 08:07 PM IST. For more news and updates on politics, world, sports, entertainment and lifestyle, log on to our website latestly.com).